No Thanks
Hanoi, Vietnam 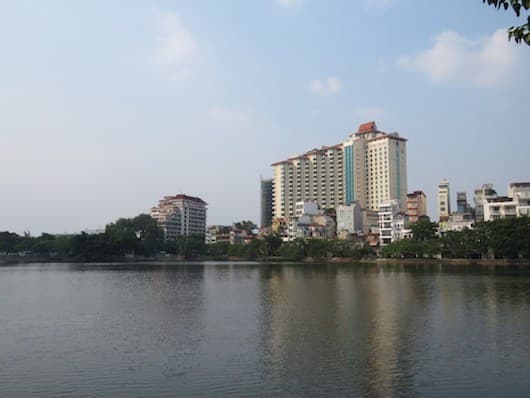 The largest of Hanoi’s numerous lakes, West Lake (Hồ Tây) is one of the best options in the city for a longer run. This popular spot is in the Tây Hồ District (named after the lake), close to the centre of Hanoi, and is among the city’s wealthier areas.

Palm-lined, nicely paved boulevards hug the shoreline, making for a perimeter loop of ~15-17 km. Gentle breezes from the lake provide some relief from the heat. There are actually two separated lakes. A small part of West Lake is divided by Thanh Nien road to form Trúc Bạch Lake (about 2 kilometers’ length, and the location where John McCain’s plane crashed during the Vietnam War). Along the route, there are many gardens, nice villas, upmarket hotels, floating restaurants, and residential suites occupied by wealthier Vietnamese and expats. One important landmark is  Trấn Quốc Pagoda, which is the oldest Buddhist temple in Hanoi and is located on a small island near the southeastern shore of West Lake, near the Quan Thanh Temple.

Runners should be aware that this area is popular with walkers and cyclists, so it might help to run in a clockwise direction.