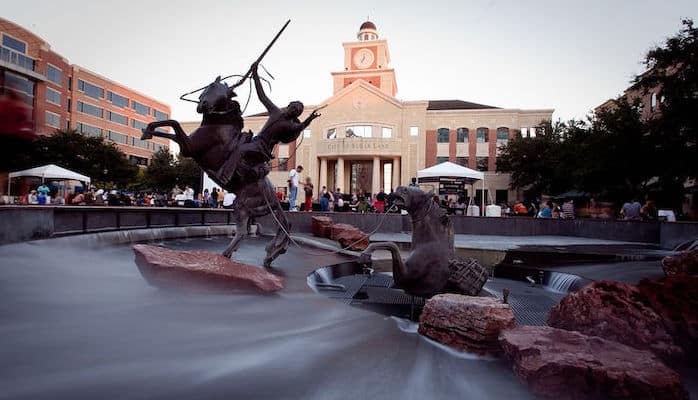 Our recommendations for running in two of Houston’s largest larger southwest suburbs,  Sugarland and Missouri City. The best residential running in the area is New Territory/Clayton’s Bend, and the streets of the First Colony neighborhood. See the Overview Map for locations.

Brooks Lake: For a perfect 5k in the center of Sugar Land, look no further than this brick, asphalt, and concrete paved loop around Brooks Lake. Nice water views!  ROUTE MAP.

New Territory: Not only is the New Territory neighborhood chock full of pretty homes, runners will find numerous concrete pathways along lakesides and canals. We’re particularly fond of the Clayton’s Bend area!

Hunters Glen Jogging Trail: The Hunters Glen neighborhood comes equipped with its own 4.5 mile jogging trail. The dirt track is a nice respite from the typical concrete of Houston. Dip into residential streets to avoid the traffic of Texas Parkway. The interior streets of the neighborhood are good for running too. ROUTE MAP.

First Colony / Mesquite Park Trail: First Colony is a 9,700 acre master planned neighborhood with nearly 10,000 homes and 50,000 residents. It’s a nice residential neighborhood for running with good sidewalks and nice home. There are also some pedestrian paths running through the neighborhood, including the Mesquite Park Trail, a roughly 1 mile concrete pathway, and a path running through the western part of the neighborhood, just east of Sugar Land Park. The nearby Oyster Creek Trail is a good addition.

MacNaughton Park/Stafford Run: This collection of paths near the Dewalt area of south Missouri City can be combined for a run of any length. We’ve mapped a 5.25 mile sample loop that can be combined with the Oyster Creek Trail. ROUTE MAP.