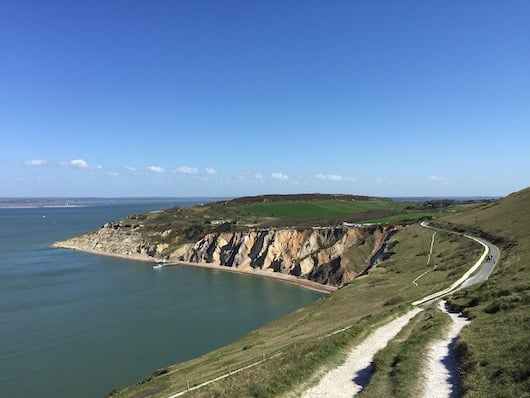 The Needles, an old fort located at the far eastern end of the Isle of Wight, is a popular visitor spot know for its great views and scenic headland trails. It’s a great spot for a run, with numerous options. Running on one of the ‘Downs’ a headland atop a cliff, is a must-do on the island.

Tennyson Trail. We recommend parking at the Alum Bay Pleasure Park Car Park. From there, head south for one mile on the road to the Old Battery and New Battery. The Old Battery is a defensive fortification built into the cliff in the 1800s to defend the Solent, and the New Battery was the secret testing ground of the Black Knight rocket in the 1950s. Both are now owned by the National Trust and well worth a visit. Above the New Battery, a walkway leads out to a spectacular viewpoint of the iconic Needles rocks and lighthouse. Footpaths and steps then head up to the top of High Down and the start of the Tennyson Trail, a scenic grass path along the cliffs with great coastal views.  For a longer run, see the route below.

You can go all the way to Freshwater Bay, or there is a signed Lower Downs footpath leading back to Alum Bay from the Beacon halfway along, making for a lovely circular run/walk!

Freshwater Bay Area. There’s up to 10 miles of clifftop path (‘Downs’) between Freshwater bay and Brightston. It’s fairly easy trail running. Run on Compton Down, a large grassy area with wonderful coastal views. Continue east for as many miles on the headland as you like, to Mottistone Down, Limerstone Down, & more.

A selection of some of the scenic waterfront promenade paths on the Isle of Wight: Cowes, Rysde,... more...