No Thanks
Kaunas, Lithuania 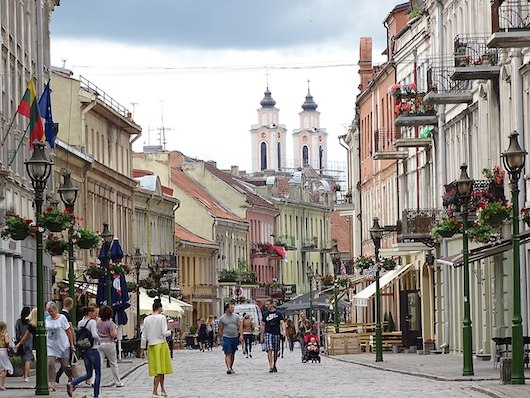 This 10k ‘runseeing’ tour of Kaunas is both scenic and hits the city’s major highlights: Old Town, Kaunas Castle, Confluence Park, and Nemunas Island. One great feature is that pedestrianized roads/paths lead to all the key sites!  Good options for longer or shorter.

We start in the historic centre at St. Michael the Archangel’s Church, with a run along the Laisves Aleja, one of Kaunas’ main commercial streets and said to be among the longest streets in Europe. It’s good for pedestrians and runs through old town for 1.5 km, passing the City Fountain, National Theater, and several other sites. Then, bear left on the Vilniaus gatvė path, which leads to the Historical Presidential Palace, 15th-century House of Perkūnas, & Lithuanian House of Basketball (a major building!).

The next section is a ~2 km loop around the Nemunas and Neris Confluence Park and Kaunas Castle, on scenic, park-like paths with some water views. There’s even a running track on the island! Then, head east for 0.5 km toward the Petras Vileišis Bridge and a park, retrace your steps, and use M. Valančiaus g. to head back through the centre to the southern end at the Nemunas River. [Option: run over the historic Great Bridge]. Run along the river path for 1.2 km, and then over to Nemunas Island (Nemuno Sala), enjoying its paths. For the return, use the Pedestrian Bridge off the island and the S. Daukanto g. pedestrian path to return to the start.

Add-Ons:  Several parks for running, just east of the route start. Also, you can run for ~3 km along the north bank of the Neris River. Use the Petras Vileišis Bridge.

Note: old town is very festive during the holidays!