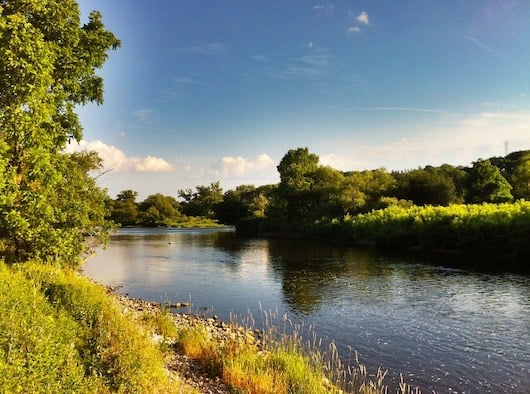 Cambridge is located 25 km southeast of Kitchener-Waterloo, at the confluence of the Grand and Speed rivers. We’ve mapped numerous river running options:

Grand Trunk Trail: Central Cambridge Along the Grand. There are many km of paths along the Grand River in the Kitchener/Waterloo/Cambridge area. This 5 km section of the Grand Trunk Trail is in central Cambridge, running from Devils Creek Falls in the north to Waterworks Park in the South. It’s a mainly dirt path, with alternating between woods and river views. For longer, the path continues for 2.5 km northwest of Devils Creek Falls to the Cruickston Park Estate, or south along the SC Johnson Trail for another 15 km toward Brantford. ROUTE MAP

Cambridge to Paris Rail Trail. Runners love this 18 km trail, which runs along the east side of the Grand River from Cambridge south to Paris. The flat, gravel trail follows the follows the old roadbed of the Lake Erie and Northern Railway along the Grand River through lush Carolinian forest, with lovely river overlooks in sections. ROUTE MAP

Speed River/Linear Park Trail. Just north of central Cambridge, a linear park path runs for 6 km through a series of parks along the Speed River. Connect to the path near the Preston Memorial Auditorium and run through Sturdy Park for 3.5 km. Cross King St. and continue on the paths through Riverside Park, and then along the Speed River to Speedsville Rd. Nice combination of park space, woods, and river views. ROUTE MAP