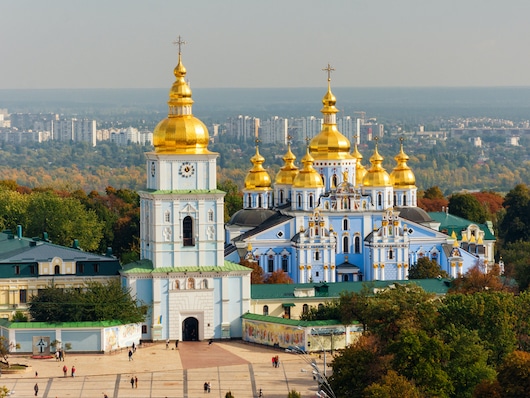 This ‘runseeing’ tour of Kyiv is a great opportunity to see some of the city’s major sights. Much of the route is off-road, and the directions are straightforward. The full tour is 13.5 km, but can be easily shortened by 3-4 km.

A good place to start is at the area of Kontraktova and Poshtova Squares, which are grand plazas and near a metro stop. Lots of good shopping and restaurants. Run through Poshtova Square, and just past the funicular station, a path leads up Volodymyrska Hill, which has sweeping views, a monument, and a loop around the iconic St. Michael’s Golden-Domed Monastery at the summit. The next 3 km section is south on park paths, crossing the Glass Bridge to the Friendship of Nations Arch, past the Museum of Water and the grand Mariyinsky Palace. Do a loop around Mariinskyi Park. Turn around and head back north, on the western side of the Palace, on paths toward the National Art Museum of Ukraine, to the grand Independence Square. Take either Khreschatyk St. or Borysa Hrinchenka St. west to Taras Shevchenko Park, with its nice walking paths, and adjacent Fomin Botanical Garden. For the final section, head back east on the wide Volodymyrska St., passing the Golden Gate (1980s replica of the 11th century entrance to the medieval city), St. Sophia’s Cathedral (1037), and the baroque St. Andrew’s Church. Follow the main road down the hill past the Castle of Richard Lionheart and an observation platform with great views, back to Kontraktova Square.

Notes:  To shorten the route, you can save 3 km by eliminating the Botanical Garden section at Independence Square. Or, make it a 10k and take the subway back from the Botanical Garden (metro: Universytet). Also, the main elevation gain is the at the outset, up Volodymyrska Hill. You can start there or take the funicular instead.