A Comprehensive Guide to the Best Places to Run in Kyiv 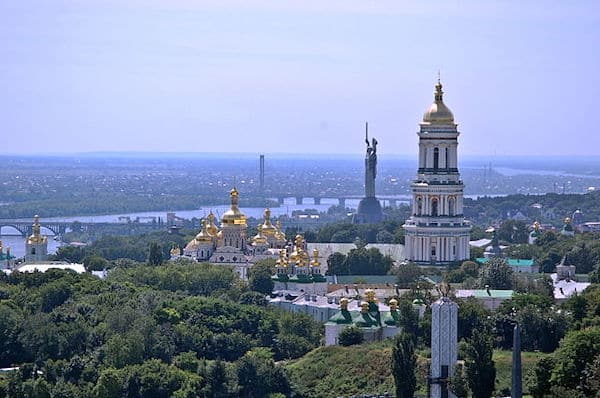 Kyiv (also known as Kiev) is the capital of Ukraine and the seventh largest city in Europe. Located on the Dnieper River, Kyiv is an important industrial, scientific, educational and cultural center of Eastern Europe. The old section of the city is quite charming, showcasing several iconic cathedrals and churches. We think Kyiv is one of the more underrated cities in Europe from a running perspective. The highlights of running in Kyiv showcase paths along the Dnieper River and the numerous large, centrally located parks.

A great way to get oriented is to use our Kyiv Runseeing Tour, which hits many of the city’s highlights and numerous parks. For riverside running, there are paths leading from central Kyiv south to Navodnitsky Park, and on the left bank, Obolonska Quay & Park Natalka. We also like running on the several ‘islands’ just across the bridges, such as Hydropark, Trukhaniv Island, and Muromets Park. Some of the best places to run in Kyiv are in its numerous parks: a popular route combines Mariinskyi Park/Palace Grounds & Park of the Eternal Glory. Other favorites include the National Botanical Garden, Peremoha Park, and a route combining Park Dubky & Park Nyvky in the northwestern part of the city. For trail running, Holosiivskyi National Natural Park is one of the few national parks in the world located within a city. Note:  Runners should take advantage of the unique stair paths that run between the river and Mariinskyi Park, and the fashionably dilapidated outdoor gyms.

Kyiv has an excellent transport infrastructure, consisting of three metro lines, a tram system, and buses. Nearly all of our routes are reachable by public transport. Runners should note that Kyiv winters can be cold and snowy — come with the right clothing. But with its abundant snow and extensive parks, Kyiv is one of our favorite winter running cities!

Some of our favorite runs in Kyiv, Ukraine

Great Views | Hilly | Historic / Tourist | Iconic | Arboretum/Botanical Garden | Runseeing
A comprehensive 'runseeing' tour of Kyiv, hitting many of city's main sights and monuments. Much of the route is through large squares and parks. It's quite easy to follow. The full tour is 13.5 km, but can be shortened. Hilly, with some great views.
Explore 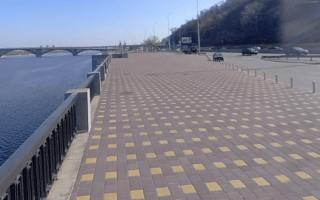 Along the Water
Pleasant paths along the right bank of Dnieper River that run from the Pedestrian Bridge near the Friendship of Nations Arch for 5 km south to Navodnitsky Park. Good water views. Good options for a loop back through parks and add-ons.
Explore 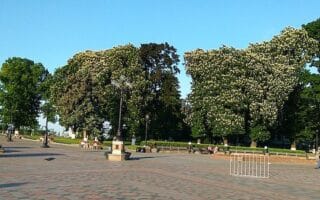 Mariinskyi Park and Park of the Eternal Glory

Historic / Tourist | Parks | Trail Running | Estates and Castles
A scenic and interesting 8 km loop combining paths, parks and sights. Nearly seamless off-road route connects the Mariinskyi Park and Palace area out to the Park of the Eternal Glory. Numerous options to vary the paths or add on. Pretty in winter!
Explore 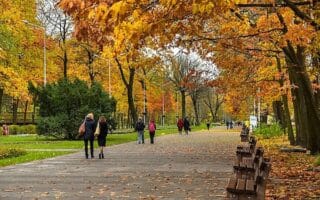 Along the Water
This island that sits in the middle of the Dnieper River is a popular urban beach and park. A loop around the island is a pleasant 5 km run, combining paved and wooded paths. Can be combined with our Rusanivska Embankment and Telbin Lake route.
Explore 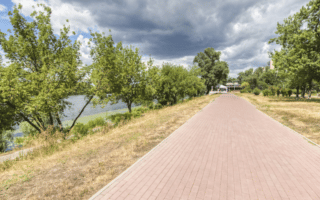 Along the Water | Multi-Use Trails
Combining a loop around Telbin Lake and the paths along the Rusanivska Embankment make for an attractive 10k waterside run on the left bank of the river, just across from Hydropark. There are great views of the water and the run is nearly all on paths.
Explore 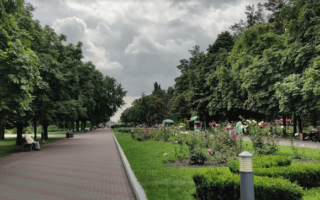 Parks | Blossoms & Blooms
Peremoha Park is lovely urban park with tree-lined, criss-crossing pathways and a lake. One can put together 4-5 km in the park, or combine with Park Kioto, a Japanese-themed park 1.5 km away, with paths lined by cherry trees.
Explore 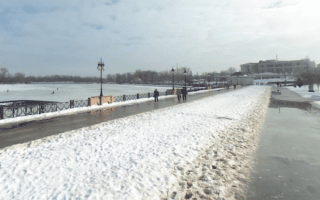 Along the Water | Multi-Use Trails | Parks
A pleasant run along the Dnieper River in the Obolon area. The 6.5 km route combines paths along the Obolonska Quay with a loop around the adjacent Park Natalka. The entire route is on off-road and multi-use paths. Great views of the water.
Explore 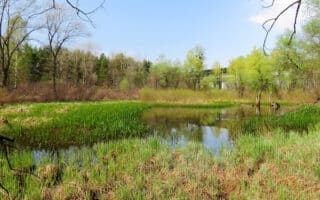 Multi-Use Trails | Trail Running
One of the more popular places to run in Kyiv, with numerous paved multi-use paths and some easy trail running on forested paths. One can run for many km on the island. We've mapped a popular 12 km loop from Yevropeiska Square.
Explore 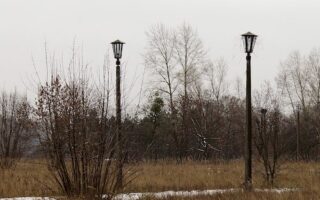 Parks | Trail Running
Large park that sits between the left and right banks of the Dnieper has some good trails for running. A highlight is the round Memorial Garden. We've mapped a 7.7 loop, but many more km are possible. Good for a longer but not challenging trail run.
Explore 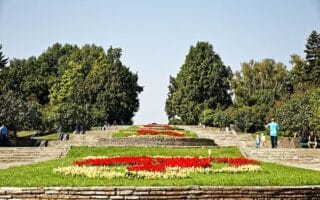 Arboretum/Botanical Garden
A particularly impressive botanical garden, and popular for running. Wide paved and gravel paths pass by a nice variety of flora and fauna. There's a fortress and a monastery at the eastern end. Can combine with Navodnitsky Park for a longer run.
Explore 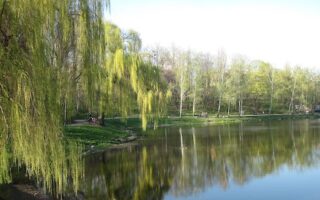 Parks
Several parks in close proximity in the northwestern part of Kyiv, easily reachable by metro. Lots of wide, tree-lined paths. Run the parks standalone of combine Dubky Park, Nyvky Park, & Syretsʹky Park for a ~10k loop. Nyvky Park is the largest of the parks.
Explore 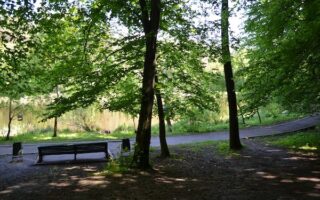 Trail Running | 'Unique' Runs | National Parks
One of the few national parks in the world located within a city. A sprawling park, with extensive trails through a mainly forest steppe landscape, with some ponds at the northern end. Many running options. Trail running but not too challenging.
Explore

Great Views | Hilly | Historic / Tourist | Iconic | Arboretum/Botanical Garden | Runseeing
A comprehensive 'runseeing' tour of Kyiv, hitting many of city's main sights and monuments. Much of the route is through large squares and parks. It's quite easy to follow. The full tour is 13.5 km, but can be shortened. Hilly, with some great views.
Explore

Kyiv has a humid continental climate with warm summers and cold winters. Summers are generally delightful, but humid. Average high temperatures are in the 26C (79F) range, and nights can cool off. Autumn is gorgeous, with lovely foliage in the Kyiv’s many parks. Winters are cold but not frigid…and they’re celebrated with lots of winter recreational infrastructure. Winter high temps are around freezing, and lows of -6C (20F). There is ample snowfall. About 620mm (25 inches) of precipitation falls annually, with winters being drier.

There’s a good range of hotels, well spread across the city. Try to stay on the right bank. If you’re near the city center, you’ll be able to access the river and Kyiv’s numerous parks. Or try to stay near a metro station, since most of our Kyiv’s routes are accessible via the city’s subway.

There are many options to buy running gear in Kyiv, including outlets of major shoe/apparel brands, and some larger sporting goods stores. See the overview map.

RunUkraine has a good list of area running events in Kyiv and other cities in Ukraine.

A signature event is the annual Work.UA Kviv Half Marathon, typically held in December. It’s a popular event! Amazingly, during the pandemic year of 2020, the ‘online’ event had 6,000 participants, representing 38 countries and five continents!