Mariinskyi Park and Park of the Eternal Glory 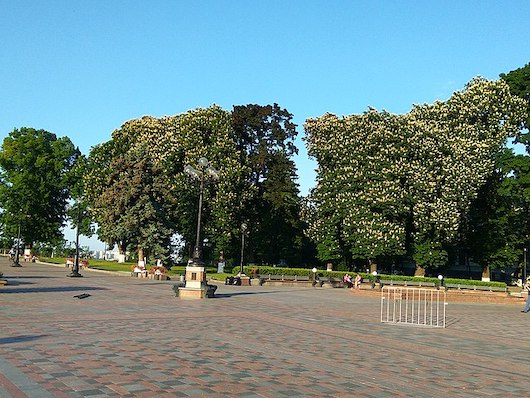 One can combine the extensive paths of Mariinskyi Park all the way out to the Park of the Eternal Glory for a scenic and interesting 8 km loop. There’s some overlap with our ‘runseeing’ tour, and good variation/add-on options. Also, runners will love the steep stairs and narrow paths that lead from the park to the river.

Start at the area of the Glass Bridge/ Friendship of Nations Arch. Head south, passing the Monument to the Frog and Museum of Water. Turn RIGHT on Petrivs’ka Alley. The next section is south along lovely paths in the area of the National Art Museum of Ukraine and Dynamo Stadium, approaching the Mariyinsky Palace. Continue to Mariinskyi Park, do a loop, and then head east briefly to join the paths just east of Parkova Rd. for a 3 km loop around Askold’s Grave and the Park of the Eternal Glory. For the return, use the more wooded paths of the section of Mariinskyi Park closer to the river. Runners preferring a paved, less secluded option can use Parkova Rd., which has a good sidewalk.

Add-Ons/Options: There are other paths in these parks that be added on or used for variation. You could also do the ‘park route’ one-way and then run along the Dnieper River path for the return. To get some hills, add Volodymyrska Hill just north of Glass Bridge.