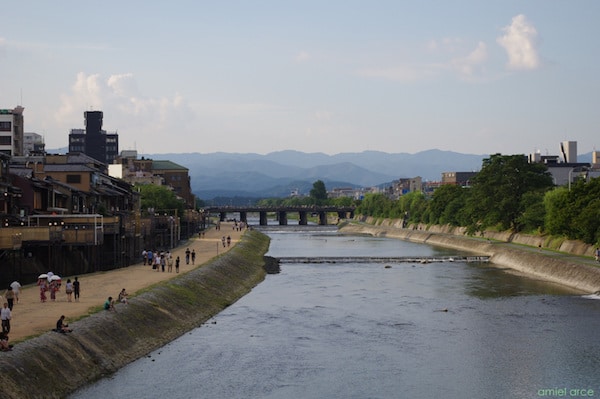 The paths along the Kamogawa River run for 19 miles and are the most popular spot for running in Kyoto. Both sides are lined with wide green areas and bike paths, with plenty of benches and exercise areas. There are also imaginative “bridges” made from stone turtles that children can use to hop across the river. At Demachiyanagi, the river splits. The west branch remains the Kamo-gawa, while the east branch is the Takano-gawa. Both are lovely, but the west (Kamo-gawa) branch has more wide park areas. This is a special place in cherry blossom season. Along the river paths there are good maps outlining three courses with segment distances

A good place to start is in the central business district, at the Jingu-Marutamachi station, just south of the Imperial Palace area and near the Ritz Carlton hotel. We have mapped two routes along the Kamo River, concentrating on the west side: north to Nishigamo Bridge, for 6.4 km (4 miles), and south to Jujo Dori, for 5.3 km. The total south-north is 11.7 km (7.3 miles). We also include a table with segment distances.