No Thanks
Lake Garda, Italy 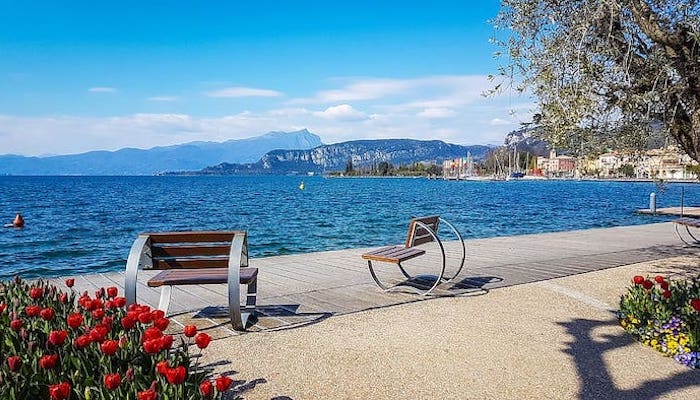 Runners will love the gorgeous waterfront paths and promenades that dot Lake Garda, with stunning lake and mountain views showcasing lakeside villages and towns. We’ve mapped ~75 km of these paths, nearly all off-road, many of which will soon be connected by the 140 km Garda by Bike Path. Below are some of the best options, starting at the northern end of the lake and continuing clockwise. See this overview map for geographic orientation. Among our favorites: the Strada del Ponale path, and waterfront options in Limone Sul Garda, Riva del Garda, and Garda.

Str. Del Ponale: 8 km out and back. One of our favorite routes in Lake Garda. Gorgeous views on an old dirt road stretching between Riva del Garda and the Valle di Ledro. While the main road has since been diverted through a series of tunnels, the Strada Del Ponale remains a popular route for cyclists and runners. NOTE: the first 1 km at the southern end is a steep hill. ROUTE MAP.

Riva del Garda to Torbole: 5.6 km one-way. Spectacular lake and mountain views on a mainly dedicated path, with several parks. Begins from Terrazza panoramica del Ponale, past the Riva Ferry terminal, onto Lungolago Marinai d’Italia, and continuing through the parks to Via Giancarlo Maroni. Crosses the River

Sarca, then continues along the waterfront to Hotel Residence Torbole – Gardasee. ROUTE MAP.

Malcesine to Porto: 8.4 km one-way. Some sections of this route don’t follow the waterfront, but most do. Start from the ferry terminal and run south on Via Lungolago. The path continues along SR249 to Castello’s Spiaggia Eden Hotel. Mainly gravel surface, much of it lit. ROUTE MAP.

Tori del Benaco: 3.3 km one-way. On the eastern side of the lake, a short path leads from the Hotel Villa Carlotta to B&B My Lake. ROUTE MAP

Garda to Lazise: ~10 km one-way. Begins at Lungolago Pincherli near Hotel du Parc. Then follows the Passegiata Rivalunga and other waterfront walkways for up to 10 km to Lazise. ROUTE MAP.

Sirmione Peninsula: 4 km one-way. The Sirmione peninsula juts into Lake Garda on the southern end of the lake between Santa Maria di Lugana and Rivoltella del Garda. There are both inland and waterfront paths leading out to Grotte di Catullo. We’ve mapped a 4 km (one-way) route from Via Verona to the Grotte. Some very pretty views above the lake.  ROUTE MAP.

Salo: 2.4 km one-way. This short but nice path runs from Spiaggia Mulino, through Salo, to the Plaza Carmine bus stop for a total of 2.4 km one way. ROUTE MAP.

Limone Sul Garda: 3.7 km one-way. One of the most popular paths around Lake Garda. Starts at Via Lungolago Guglielmo Marconi, then uses Via Nova to connect to Via Reamol. The bike path continues along SS45bis to Banchina panoramica da Riva del Garda a Limone del Garda, which has some excellent cliffside views.  Some sections along the water, some sections above it. ROUTE MAP.