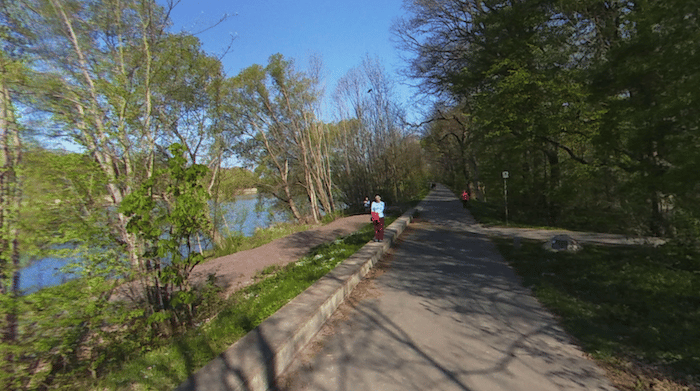 Leipzig lies at the confluence of the narrow rivers White Elster, Pleiße and Parthe. There’s a good network of waterside multi-use paths, with numerous adjacent parks and riparian forest preserves containing additional trails. We’ve mapped a northern and southern river route, starting from just west of the center in Clara-Zetkin-Park.

Northern Route: Pleasant running along the Elsterbecken and Neue Luppe rivers for up to 9 km one-way. The path, some paved but mainly gravel, is on the eastern side of the river, with water views along a good section although blocked by trees in some areas. Points along the way include Red Bull Arena at 2 km (running track, and Auwald forest across the way), Auensee Lake (5 km), and the pretty Schloßpark Lützschena at 8 km.

Southern Route: This is the shorter route, headed south for 3.5 km from Clara-Zetkin-Park along the Elsterflutbett and Pleiße rivers. The gravel path is on the eastern side of the water, except for a brief section on the western side. At the southern end of the path, the Elster-Pleiße-Auwald (riparian forest) has an attractive wooded path for running on the western side of the river.