No Thanks
Ljubljana, Slovenia 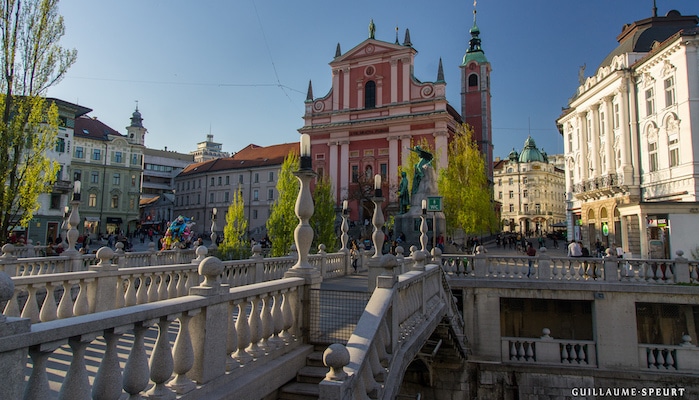 From medieval times to the rise of communist Yugoslavia, Ljubljana is a city with a rich history — much of which is reflected in its elegant, varied architecture. Unlike other European cities, where running is nearly impossible in the cramped downtown streets, running the historic Old Town of Ljubljana is both simple and welcome. This runseeing tour utilizes riverside paths, bikeways, and cobblestone streets en route to some of the most noteworthy tourist destinations in Ljubljana.

Start at Mestni Square, in the heart of Old Town, and head south on cobblestone streets until the Hercules fountain. At St. James Bridge (most=bridge), cross the river towards Zois Pyramid and work your way north along Breg to the University and Congress Square. Connect to the Slovenska cesta footpath, then RIGHT on Dalmatinova ulica, which will take you through the modern district of Ljubljana to Miklošičev park. Head back south on Miklošičev cesta for some great examples of Ljubljana’s 20th century architectural style and arrive at the famous Triple Bridge. Take a LEFT onto the river path and you’ll pass the beautiful Mesarski Most (sculpture bridge). Here, you can cross back to the Ljubljana Cathedral and your starting point, or continue on footpaths up to Metelkova Street, home to the artistic and cultural pulse of the city. If you choose the latter, simply loop back to the river on Maistrova ulica at the Metelkova Art Center, cross the bridge, and follow the riverside path to your starting point. Combine with the Castle Hill paths for more distance and more history!

At 5 square kilometers, Tivoli Park is the largest park in Ljubljana — a refreshing sprawl of... more...