No Thanks
Long Beach, CA 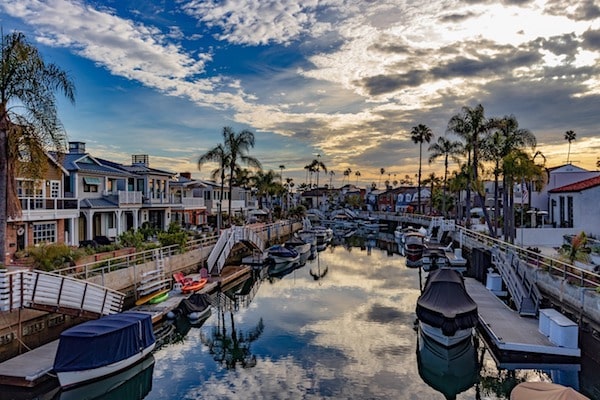 This is the other particularly scenic run in the Seal Beach and and Naples areas, consisting of numerous paths along Alamitos Bay and around the Marina. If you like boats, this is an especially nice run! We’ve mapped a run of nearly 10 miles, much of it along waterside, off-road paths. Use our route as a guideline to create your own route of longer or shorter.

The route starts in Belmont Shore. Head away from the ocean along Bayshore Ave., and then do a Marina tour in Belmont Park, with nice views of Alamitos Bay. At Marina Vista Park (1.6 mile mark), do a loop out to the Jack Dunster Marine Biological Reserve (pretty, 2 mile out and back). The next ~ 1 mile section is on the east side of the Alamitos Bay path, to Jack Nichol Park. Then, get onto the Pacific Coast Highway to cross over the water, and then onto a path paralleling E. Marina Drive, for a 1.7 mile jaunt to Alamitos Bay Landing. Return to E. 2nd St., crossing over to Naples — a neighborhood built on three islands, divided by canals which open into Alamitos Bay. Most of the streets on the island have Italianate names. Run along the waterside paths paralleling E. Lido Ln., and then through pleasant La Bella Fontana Park to the ___ (you guessed it…). Use E. The Toledo to get to E. 2nd. St. to cross back over the water and return to the start.

Seal Beach Add-On: This is a lovely 3.7 mile standalone run or an add-on, with nice paths along the bay and beach, and an 0.7 mile park with paths paralleling Electric Ave. in ‘Old Towne’. From Alamitos Bay Landing, take Marina Dr. to the San Gabriel River Trail, toward the beach. At Ocean Ave., run south for 0.6 miles to the pier, do the 0.6 mile out and back out Seal Beach Pier, and then run along the beachfront path for nearly 1 mile around to the end of Seal Beach, to where the path runs into Electric Ave. Run through the park’s paths for 0.7 miles, past the Red Car Museum, then LEFT on Marina Dr. back over the water.

Additional Options: Pleasant, quiet residential side streets with lovely homes in Seal Beach, Naples, and the Marina area (especially in and out of the Canals. Sort of like Venice Beach). Can also add our Long Beach waterfront route.

A wonderful series of paved paths along the water, running from the Aquarium in Long Beach for... more...