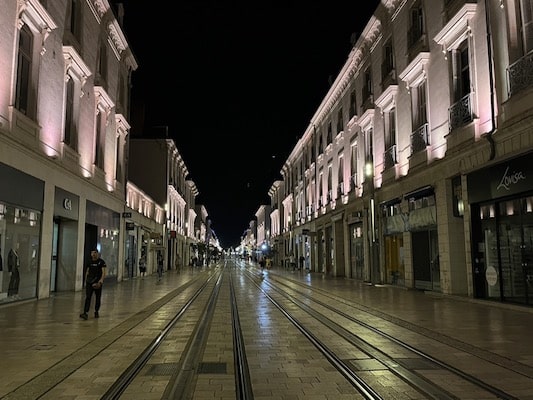 One of our favorite things about Tours is its several long, wide streets, allowing for a nice exploration of the city and its major sites without a lot of turns. Use the Place Jean Jaurès, with the spectacular Hôtel de Ville de Tours (City Hall) as an anchor point. From there, Bd. Béranger is a wide street with a tree-lined median that runs east-west, while Rue Nationale is a wide pedestrian street that runs south toward the river (and beautifully lit at night!).

Starting at Place Jean Jaurès, head east briefly on Bd. Béranger, then toward the river on R Jules Simon, passing the Cathédrale Saint-Gatien and the Château de Tours. Use the pedestrian bridge to cross over the Loire River, then head west on the river path to Pont Wilson (or Pont Napoleon for a slightly longer run). Cross back over, using Rue des Tanneurs as the anchor point for your own exploration of Vieux Tours, the historic old town.

Add-Ons: Use our mapped route to create your own additional exploration of the river paths, paths around l’île Simon, bridges, and streets of Vieux Tours.

A 10k 'runseeing' tour in Tours incorporates scenic paths along the Loire River, numerous bridges, and a... more...

For a pastoral run in Tours with lots of variety, head just south of the city to... more...