No Thanks
Malacca, Malaysia 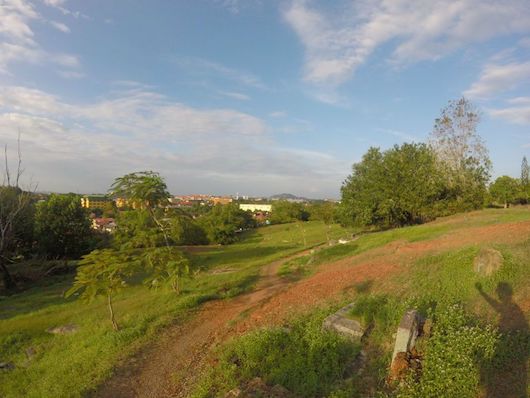 For those who want to get in a bit of hill work and some greenery (Bukit=Hill), these three areas all within a couple of km of each other make for a good run either standalone or in combination. We’ve created a map that does the perimeter of each area and shows the best running connections between the three parks.

The Bukit Cina hillside dates back to the 15th century features a temple, burial ground, and a well. There’s a series of paths, including a fairly open path following the perimeter of the park, a loop of about 3 km. It’s a popular spot for running. Since it’s fairly open, best to avoid the heat of the day.

Bukit Serindit is about 1 km east of Bukit Cina. This is also a hilly area, and location of two adjacent recreational parks. There are paths for walking and running, sports fields, and small lakes. A loop around these areas could add up to 2-3 km.

From the south end of Bukit Serindit, it’s about 1 km south to St. John’s Hill, where there’s a pleasant, shaded road to St. John’s Fort, which is a good spot for hill practice! The road to get there, Jalan Ayer Leleh, is not that pretty, but it is runnable.

To return to Bukit Cina, use side roads: Lorong Tambi Abdullah 3&6, and Lorong Laksamana Cheng Ho 1. Or, use Highway the main road Route 5, which is runnable but not pleasant.

The signature running spot in Malacca. Paths run for about 7 km along the river. In the... more...