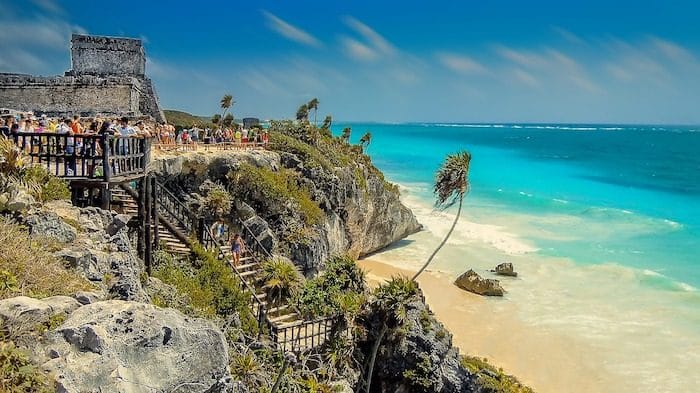 The ancient Mayan port city of Tulum is a popular visitor site at the southern end of the Mayan Peninsula, known for its well-preserved ruins, archeological park, and beautiful beach. Below are our recommendations on where to run in Tulum. Note that these are somewhat overlapping and can certainly be strung together for a for a longer run. Run among the ruins. If you tread gently and go at times to avoid the crowds, you can run among the few km of paths around the Tulum National Park & Archaeological zone. There are distinct paths with views of the ruins, as well as a the verdant landscape and coastal views.

Bike Paths from Town to Beach. There are a couple of good bike paths that provide good running options. From town, there’s a bike path to the beach that’s also popular with runners. About 2.5 km, and can be combined with running on the beach or the archaeological site paths. Also, a path/good sidewalk runs from the southern part of town closer to the hotel zone, from Itzamna St., along Aldea Zalma to Av. Coba, for nearly 4 km (2.8 miles).

Beach. Tulum is famous for its beach. It is wide, with beautiful views and waters. It’s about 1.5 km from the Santa Fe nature preserve in the north to the south end near the Las Palmas public beach.

Road Along Beach. There are lots of cars but traffic is generally slow moving. The road is fairly narrow and there’s no sidewalk/shoulder. But it’s runnable, with nice foliage and some shade — but no water views (not recommended after dark).

Coastal town on the Riviera Maya. Best running options are the pedestrian path along the Quinta Avenida,... more...