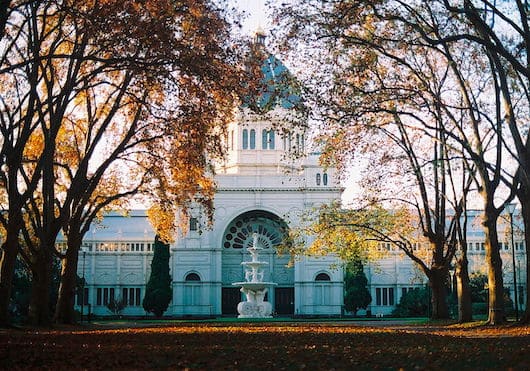 This is a lovely ~10k tour of several central Melbourne Parks, the Olympics/Australian Open sites, and the area around Parliament. We’ve mapped a route, but best to use it as a guideline since there are so many paths. Some of this route is a bit hilly, mainly the section north of Wellington Parade.

A good spot to start is near the Jolimont Train Station. Begin with an exploration of the pleasant paths of Yarra Park, which includes the Melbourne Cricket Ground. Cross over into Melbourne & Olympic Park, which contains buildings from the 1956 Olympic Games and is now the site of the Australian Open and numerous recreation facilities. At the western end, run through Birrarung Marr park and use the pedestrian bridge to cross over the train tacks to Fitzroy Gardens and explore the paths and gardens of this park dating back to 1848. At the northern end, cross Lansdowne/Albert St. to do a little jaunt around the colonnaded Parliament House, seat of Victoria’s government. Cross Victoria St. and do a loop around Carlton Gardens, a Victorian-era park with museums. For the final section of the route, head back south through the Parliament complex through the Treasury Gardens and then along Wellington Parade, a narrow linear park with paths through Wellington Park and Jolimont Reserve.

One of the best bike paths in the Madison area, this 17-mile route winds through the forests... more...