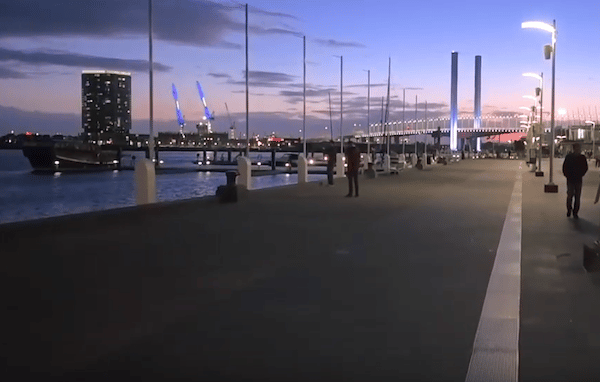 This is another run exploring Melbourne’s extensive waterfront. This one is just west of the Capital City Trail, and features several promenades along the Yarra River, and around the wharves and sights of the Docklands area. A full tour is over 13 km, but there are options to shorten. One attractive feature is the Webb Bridge, a pedestrian bridge connecting the Yarra with the Docklands.

Start at the Melbourne Aquarium, and run west along the riverside boardwalk for 1.3 km, past Batman Park. Run under the highway, turning north to do a ~5 km  loop through Docklands Park, passing Marvel Stadium, and along a section of the Capital City Trail, turning LEFT at Monument Park onto the Newquay Promenade to the Moonee Ponds Creek Trail. Retrace your steps to the Port Phillip Ferries Docklands Terminal, and do a quick jaunt out to Victoria Harbour. Run back through Docklands Park and take the pedestrian Webb Bridge path to the south side of the river, turning RIGHT to head east along the River Esplanade for a ~2 km out and back to Point Park. Returning, continue along the S. Wharf Promenade path along South Wharf for 1 km, crossing back over the river on the pedestrian Yarra Promenade path, paralleling King Street Bridge. LONGER OPTION: Add Capital City Trail, just to the east.

One of the best bike paths in the Madison area, this 17-mile route winds through the forests... more...