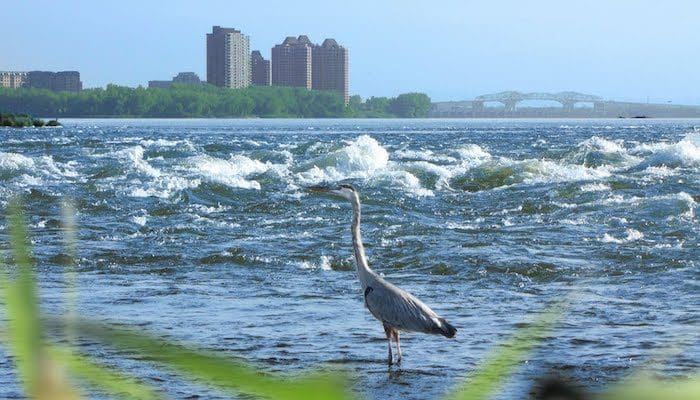 At 13.5 miles long and made up of mainly green spaces, this exceptional, uninterrupted path runs along the St. Lawrence River, starting from the west side of the Bonaventure highway in Verdun to Parc René-Lévesque in Lachine. Take in the magnificent views of Lac Saint-Louis and the spectacular Lachine rapids. The entire path is 13.5 miles long. We have mapped 9.3 miles (15k). The eastern part of the path starts in Verdun near the Lasalle Metro station, across from Nuns Island. The western end is in Parc Rene Levesque, which juts out into the river. One can continue further west in Lachine. Note that the western end is only a few miles south of the airport. Along the path, there are numerous add-on options, with additional paths in Rapids Park and Aqueduct Canal Park.

Loop Option – Aqueduct Canal Park: At the 6-mile mark of our route, at Aqueduct Park, you can return along the path along the Aqueduct Canal. It’s a paved bike path, with some views of the narrow canal. Not as pretty as the Lachine Rapids path, but a good variation. You can also explore the large and lovely Angrignon Park, which is about 4 km from Aqueduct Canal Park.