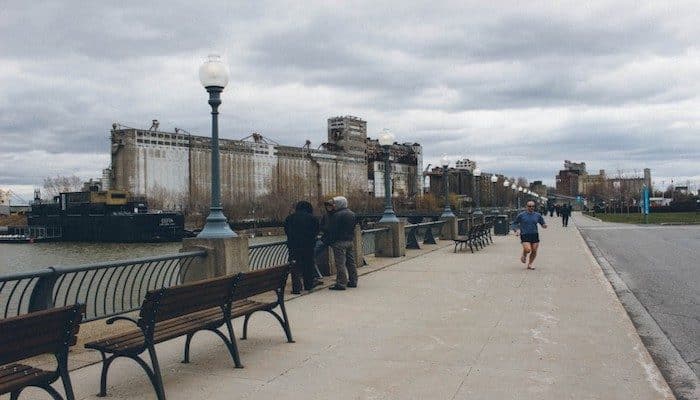 Montreal has a wonderfully preserved and refurbished Old Port (Vieux Port) and old city (Old Montreal/Vieux Montreal). The area along the water has a series of paths along the Lachine Canal/basin and the St. Lawrence River, where there are also several museums and visitor attractions. The interior streets are lined with quaint shops and restaurants. We’ve mapped a mainly waterside route, which you can use as a guideline for creating your own.

The route starts at the area of the major square Place Jacques-Cartier/Champs de Mars, location of City Hall.  Head toward the water, and run on the 4-5 km of waterside paths between the iconic Clock Tower to the east and Rue de Seigneurs to the west. The “Basin de Horloge” area has a skating rink in winter, plus a ferris wheel and other attractions.

Add-On Options: Continue west on the Lachine Canal Path. It’s 1.2 km from Parc de Seigneurs to Rue Atwater, where you can join our Lachine Canal route headed west. You can also run on some of the quaint interior streets of Old Montreal — we particularly favor Rue St.-Paul, and Notre-Dame St. West, which will lead to the famous Notre-Dame Basilica at Place d’Armes.