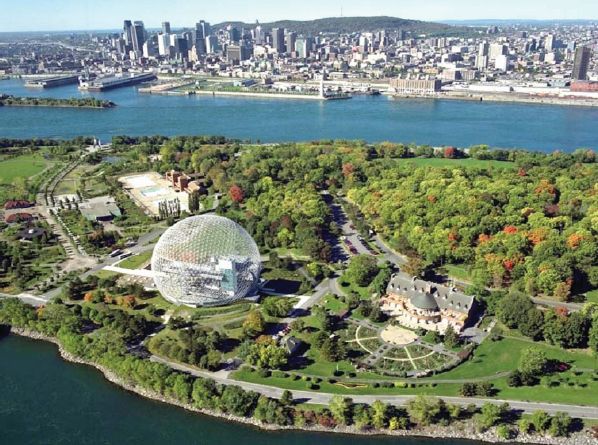 This is a unique and spectacular route, running from downtown to St. Helen’s Island, site of Montreal’s historic Expo 67. Montreal’s Parc Jean Drapeau consists of St. Helen’s Island and Ile Notre Dame. They are island parks in the Saint Lawrence River. The island is now a large park, with pleasant walking/running paths and picnic areas with lovely views of the St. Lawrence River. A Six Flags amusement park is also located on the island. Note that the park is named after Jean Drapeau, a beloved Montreal mayor who brought the Expo and the Olympics to the city.

The route we have mapped out here starts downtown at the Papineau Metro station. Follow the bike path to  “Pont (Bridge) Jacques Cartier” and cross the bridge on the bike path. After crossing the bridge, head down the hill, following signs to Ile Ste. Helene, then following the perimeter of the island, taking you by sites such as the old U.S. Pavillion, now turned into a biosphere. You can also drive or take a metro right to the island (Drapeau station). There’s great signage on the island.

Add-On Options: Ile Notre Dame. This island is used for the annual Grand Prix, and there are wonderful trails covering 3–4 miles around, including a circuit around the Grand Prix route that cyclists use for time trials, a path along the rowing basin, and terrific trails along the water with skyline views. Access Ile Notre Dame from a small bridge near the Biosphere on St. Helen’s Island. There is a casino on Notre Dame Island.