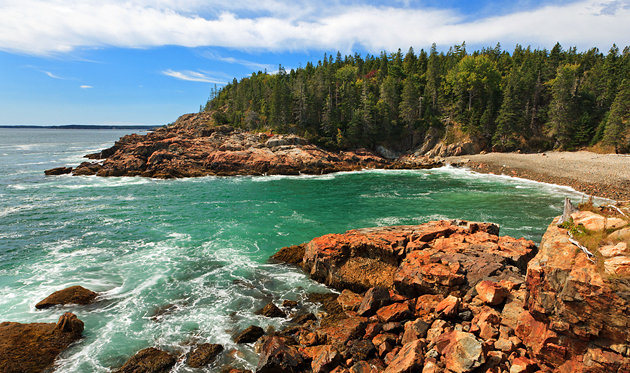 Featuring the stunning Maine coast, Acadia National Park gets over 3 million visitors each year and is one of America’s most visited national parks. The park is located near Bar Harbor, Maine and occupies much of Mount Desert Island. Acadia National Park features granite cliffs side by side with sand and cobblestone beaches. Glacier-carved mountains rise from the sea, cupping deep lakes in their valleys. Acadia is famous for Cadillac Mountain — and it is possible to run up it. Its green, lichen-covered, pink granite summit is, because of a combination of its eastern location and height, one of the first places in the United States to see the sunrise. Note: the park can be very crowded in summer. There’s a great shuttle bus system, which is a bonus for runners wanting to do one-way routes!

Acadia’s weather is largely a product of latitude and marine influences. Spring can be foggy with temperatures ranging between 30 and 70 degrees. Summer daytime highs average in the 70s, and it can get chilly at night. Fall brings temperatures ranging from low 70s during the day to freezing during the night. Fall foliage often peaks during the first couple of weeks in October. During winter, due to Acadia’s coastal location, snow and weather conditions change rapidly. Temperatures vary from mid-30s to below zero. The park averages 61 inches of snow annually, lower than some inland areas at the same latitude due to the ocean influence.

Our major running recommendations for Acadia are the Carriage Trails; the Park Loop road; a loop around Jordan Pond; and the challenging run up Cadillac Mountain. For trail runners, there are some gentler hikes that can be done as runs. The Park recently acquired land on the Schoodic Peninsula, where a 6-mile loop road and 8 miles of bike paths are good for running.

Acadia National Park’s Carriage Roads are among some of the loveliest and most run-friendly options of all the National Parks. These 45 miles of rustic carriage roads are the gift of philanthropist John D. Rockefeller Jr. and family, weaving around the mountains and valleys of the park. Rockefeller, a skilled horseman, wanted to travel on motor-free byways via horse and carriage into the heart of Mount Desert Island. His construction efforts from 1913 to 1940 resulted in roads with sweeping vistas and close-up views of the landscape. The carriage roads have crushed rock surfaces and wind through the heart of the park. They have been lovingly maintained. The roads are mainly wide, wooded trails, relatively flat, some with fantastic views to the water. These trails are especially gorgeous in autumn! And in winter, if there’s 6″ or more of snow, the trails are groomed by a group of volunteers! And they’re wide enough so runners and winter sports lovers can share the trail. Grooming/snow status here.

It is possible to run along the 27 mile (43km) Park Loop Road at Acadia. There is a shoulder in parts, but not all. The eastern section of the loop road from just north of Cadillac Mountain to near Jordan Pond is one-way. The road south of Sand Beach features some of the best views. One can run along any section of the road. The most spectacular section with the best views is south of Seal Beach to Little Hunters Beach, which is 4.7 miles one way, featuring 220 feet of elevation gain. There is a path along the ocean for some of this section. One option for runners is to run one way along a section of the road and use the Park Shuttle to get back to starting point. Note: the park loop road is closed in winter.

Cadillac Mountain is the highest point along the North Atlantic seaboard, and it is the first place in the United States to see the sunrise from October 7 to March 6. Running up Cadillac Mountain is a great running challenge. There is a paved road, accessible to cars, that rises from the Park Loop Road to the Cadillac Mountain summit. It is 3.3 miles one-way to the summit, with an elevation gain of some 1,000 feet with grades of 5–7% most of the way. There are some great observation points just off the road along the way, providing a good opportunity for a rest!

See our separate post for the Schoodic Peninsula/Winter Harbor, which highlights a 6-mile loop road and 8 miles of bike paths.

Pleasant running on the 'quieter' side of the island. The run from Southwest Harbor to Manset features... more...

Bar Harbor is the main commercial area of Mount Desert Island and the gateway to Acadia National... more...