No Thanks
Nottingham, England 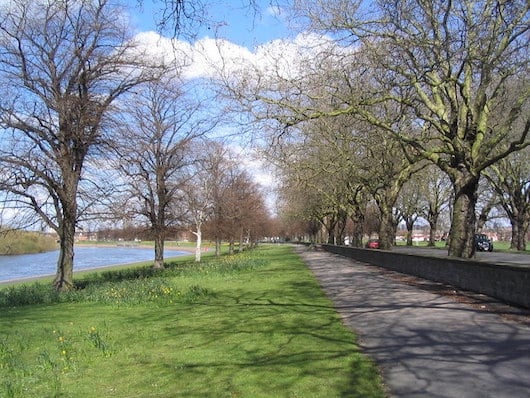 The numerous paths along the River Trent are among the running highlights in Nottingham. There are numerous options for loops or longer runs exploring both banks of the river, headed east toward Colwick or west toward the Attenborough Nature Preserve. We’ve put together a few options that can be mixed in various ways. The best way to access the river from central Nottingham is on the Queen’s Way path from Nottingham train station (0.7 miles). The three bridges that are best for crossing are the Wilford Footbridge, Wilford Suspension Bridge, or the Trent Bridge.

North Bank & 3-mile loop: The best running on the north bank of the River Trent is the 1.6 miles from just west of the Wilford Footbridge to just east of the Trent Bridge (A60), where the river meets the Nottingham Canal. Add on with paths in the Meadows Recreation Ground. For a nice 3-mile loop, run between the Wilford Footbridge and the Trent Bridge.

South Bank: Nearly 7 miles of paths, mostly under the road and alongside the river, with terrific water views. From the Wilford Footbridge, it’s 3.5 miles east to Colwick Country Park (additional trails there), and 3.25 miles west to Canalside Heritage Center (additional trails around the Attenborough Nature Reserve).