No Thanks
Odessa, Ukraine 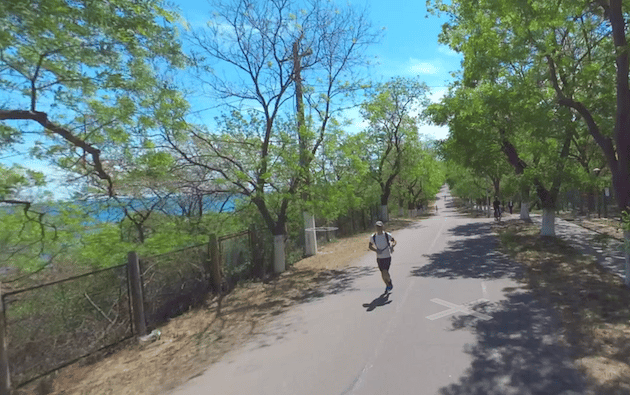 The ‘Path of Health’, between Lanzheron Beach and Arcadia Beach, is the iconic run in Odessa. The route is a combination seaside promenade and paved multi-use path (Zdorovya Track) above the beach. It’s up to 6.3 km one-way. We recommend running along the water one-way and then on the park paths the other way. It is possible to run  along the beach, although it is not 100% continuous, is narrow in sections, and can be crowded in season. Also, the sand is generally soft. Bonus: Zdorovya Track is well-lit at night!

A good place to start is at the Lanzheronivska Arch, in Tarasa Shevchenka Park just above Lanzheron Beach. Make your way down to the waterside path — it’s hard concrete and a bit rugged in spots, but there are wonderful views to the Black Sea. There are a couple of sections where you’ll need to divert from the water onto the bike path, and some path/stair connections between the park and the beach. Once you reach Arcadia Beach, turn around and retrace your steps along the waterside path for 1.5 km, and then run along the Zdorovya Track for the return. It’s green and pleasantly shaded, with occasional glimpses of the water. Option: there’s a quieter gravel path parallel to the bike path for some of the route.

Add-Ons/Options: Additional paths in Park Tarasa Shevchenka. Just inland from Arcadia Beach is the Peremohy Arboretum, which has lovely paths. There are also additional waterfront paths for ~5 km from Beach #8 (near Park Yunist) to Zolotyi Beach. You can connect to it from Arcadia Beach but it’s ~2 km along a road (runnable).

This 11 km route has it all: grand parks, iconic bridges and stairs, and some of Odessa's... more...