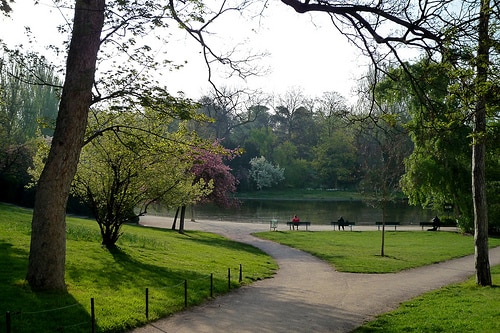 This is the largest park in Paris, about 4 miles east of Notre Dame in the 12th arrondissement. The park was created between 1855 and 1866 by the Emperor Napoleon III. There are beautiful paths for running in this park. Highlights include the medieval Chateau de Vincennes, an arboretum, floral gardens, and numerous other natural and recreational facilities. The best bet is to randomly enjoy the miles of paved and unpaved paths. A tour of the outer perimeter trails is ~4.5 miles. Other options: 1 mile around Chateau de Vincennes; 1.4m around Lac Daumsenil. Or look for the “Circuits Pedestres”, which include 11k and 8k loops. Many more trails can be added. The trails are well signed, with mile markers. 15 minutes by metro. A good option for a longer run is from City Hall, which takes you by Bastille and then on some greenways and good running roads into the park. Do it one way and take the Metro back! Or, take the Promenade Plantée path back to Bastille, from Port Dorée entrance.