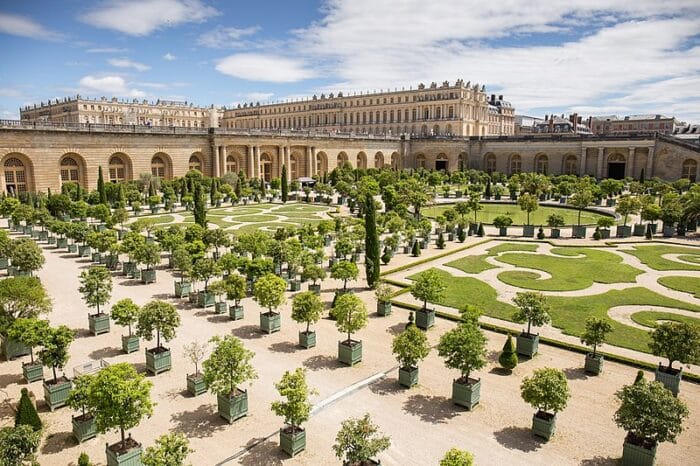 Versailles is world-renowned for its Château and gardens, which are designated UNESCO World Heritage Sites. It’s a great day trip from Paris and has some wonderful running. Saclay, just south of Versailles, has two nice paths around fields and farmland.

Chateau Run: 10.3 km (6.4 miles) one-way, Elevation Gain 75m
The Versailles Gardens are huge and open to the public, with many wonderful landmarks, including great views of the palace, a section of formal gardens and highly sculpted allées, and then, further westward, bucolic paths going by farms and fields. A great ~10k run is to start at City Hall right in Versailles, head into the Palace grounds, and along the formal gardens to the perimeter of the Grand Trianon, and then on the paths of the perimeter of the Canal and fountains. ROUTE MAP.

Meudon Forest/Standard Athletic Club:
Just east of Versailles, the Meudon Forest offers up plenty of running opportunities for trail runners of all levels. While there are some more technical routes in the park, there are also some flat and smooth gravel roads that present the same scenery without the tripping hazards. Head north to the Standard Athletic Club area for more trails. It’s easy to put together a loop of 7 km or more. Note: Some trails are hilly! There is not a good, publicly available digital trail map of the forest. We’ve mapped a ~5 mile loop as an example of the trail selection. ROUTE MAP.

Rigole Domaniale Path: 6 km (3.7 miles), Elevation Gain 72m
This bike path stretches across the Plateau de Saclay, southwest of Paris near Versailles. It’s a flat gravel surface alongside the Rigole Domaniale stream. Runners can pick it up off of Rue de Paris just south of Saclay and continue southeast for about 6 km to the Palaiseau Forest, where there are even more trails. ROUTE MAP.