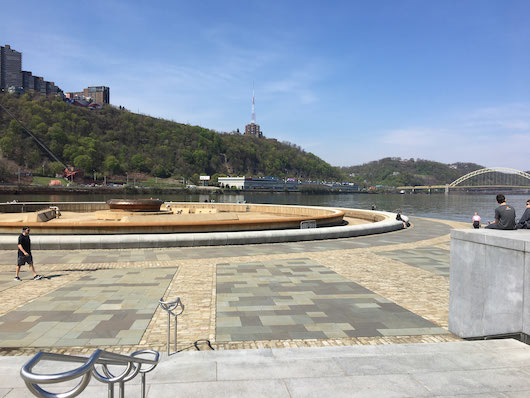 Josh Kery submitted a creative, 11+ mile Pittsburgh tour whose route map is in the shape of a ballerina! This route covers downtown, Point State Park, the Cultural District, Uptown, Middle Hill, and Duquesne University. Josh’s creative route description is below.

Start in Strip District, 14th Street. Head into the riverside parking lots to work on the ruffles of the tutu. From near the Convention Center, draw the left leg by going straight towards the Point (State Park) on Penn Ave. Work closely on the foot here—this is what the drawing’s all about. Hug the Allegheny side as you approach the park, then round the fountain, turn into the Rt. 276 tunnel, and curve out to get the detail in the toe and heel. Cut over and up city blocks until you get to Forbes Ave.—this is the right leg, in passé—then head into Uptown. The other side of the tutu can be done by climbing into Duquesne campus and using the courtyards to draw the frills. Hill District: Upper body. Leave Duquesne U. on Chatham Sq., into Washington Pl., turning right on Center. Head towards Lombard St. to start the underarm, then use Bentley Drive to capture the arm’s curve in 5th position. The hand can be completed in a loop in Oak Hill. Return down Bentley Drive until Devilliers St. Careful: The head is tricky here. Recommended is to draw a nose with part of Skyline Terrace, top off the head with Kirkpatrick, and head down Wylie Ave. until Robert St. for the back side of the neck. Final push to finish the left arm—head back uphill on Webster St. and loop near Junilla St. for the hand. Don’t worry about the details here. End with the left torso on a long downhill, Bedford Ave. (Detour on Cliff St. for ponytail or bun.) Take Grant St. at the hip to get back towards Liberty Ave. and the Strip.

Shorter Option: For those looking for a lighter run, try cropping the drawing at the waist line by taking the shortcut from Duquesne to Liberty Ave.

Highlights: The view from on top of the head and hands can’t be missed. Best vantage point is: Hair tied back at August Wilson Park. Clear view of the left side of the tutu. Also of note, closing the right hip at Epiphany Catholic, view of U.S. Steel building from the backside, and the Point en pointe.