A comprehensive guide to running in Pittsburgh 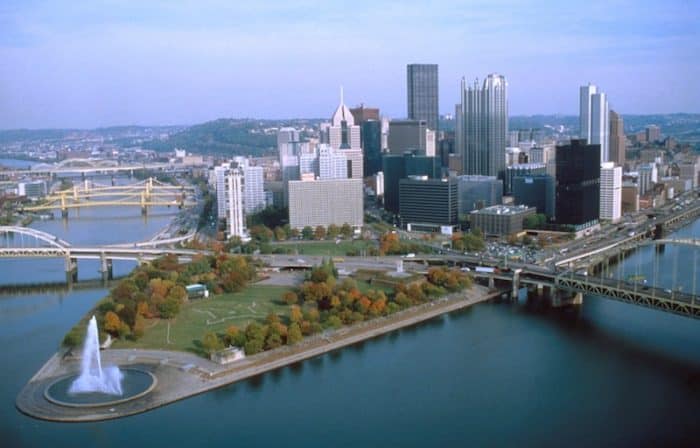 Pittsburgh is a great city for running, with lots of variety. The “Steel City,” named due to its previous prominence in the steel industry, boasts city running along three rivers, many parks and trail runs, and hills, including a view of the city from the top of Mount Washington (elevation: 1123 ft). The Heritage Trail, sort of like the Charles River Trails in Boston, is downtown and takes advantage of the convergence of “three rivers”, with numerous options for good loops.  Another favorite area, near downtown, includes lovely Schenley Park, Frick Park, and connecting neighborhoods.  There are other park runs and challenging hill runs easily accessible, especially on the “south side” of the Monogahela River. Note: running in Pittsburgh can be hilly!

Some of our favorite runs in Pittsburgh, PA 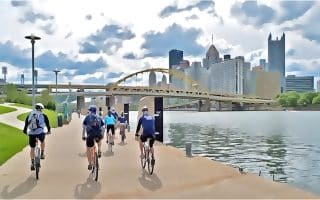 The signature running option in Pittsburgh. 24 miles of trail, along both sides of all three rivers in Pittsburgh.There are three main ‘sections’ of the Heritage Trail, with bridges connecting the downtown core to the north and south sides.
Explore 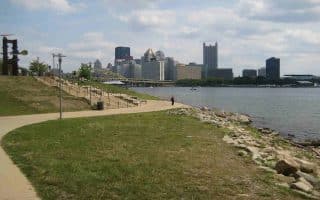 This route mostly follows the 7-mile continuous stretch of the Three Rivers Heritage Trail that covers the Strip District and the North Shore sections of Pittsburgh, running by most of the major tourist attractions within the downtown area.
Explore 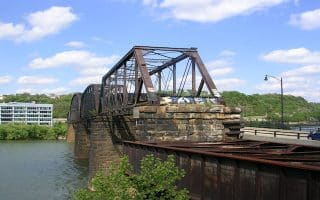 A classic Pittsburgh run, combining pleasant riverfront paths and the city's grittier north side, which includes passing by the Allegheny County Jail.
Explore 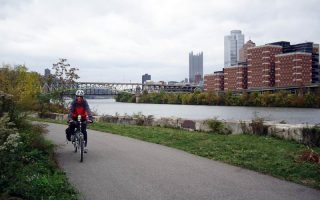 This section of the Three Rivers Heritage Trail runs towards the south side of the city along the Monongahela River. Views of the verdant Mount Washington hills. Pass by the The UPMC Sports Complex and the Pittsburgh Steelers' practice facility.
Explore 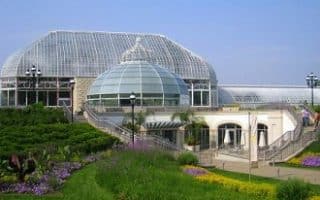 Three miles from downtown, there is great running near The University of Pittsburgh and Carnegie-Mellon University. A highlight is Schenley Park, with 456 acres of trails, the Phipps Conservatory and Botanical Gardens.
Explore 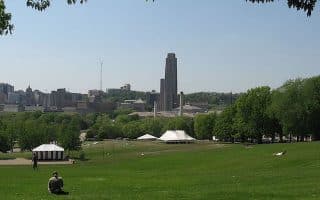 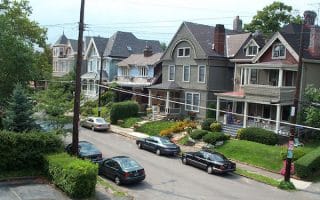 Create your own route on the side streets of these adjacent residential neighborhoods. Quieter, tree-lined streets with nice older homes and small commercial areas.
Explore 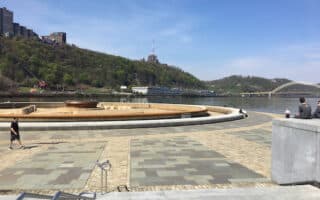 A unique tour of Pittsburgh's downtown, Point State Park, and several neighborhoods, whose 11.5 mile route map is in the shape of a ballerina! Josh Key submitted this unique route along with a creative description.
Explore 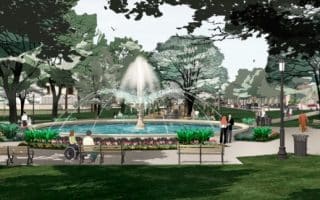 The Lawrenceville section of Pittsburgh, 4 miles from downtown, is near many of the city’s hospitals and is a good area for running, including Highland Park and the Allegheny Arsenal.
Explore 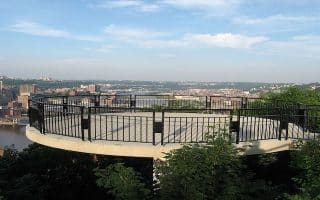 The highlight of this run is a climb to the Mount Washington Overlook, with great views of the Pittsburgh skyline. Starts from downtown.
Explore 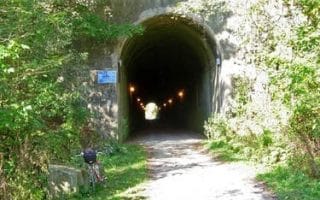 A good option near the airport. The Montour Trail runs 46 miles around the southwest part of Pitsburgh and to some of the neighboring communities. A connector trail to the airport was completed in 2012.
Explore 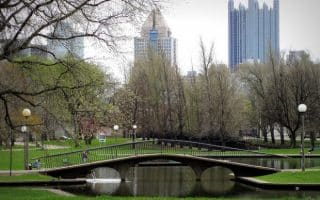 The signature running option in Pittsburgh. 24 miles of trail, along both sides of all three rivers in Pittsburgh.There are three main ‘sections’ of the Heritage Trail, with bridges connecting the downtown core to the north and south sides.
Explore

Three miles from downtown, there is great running near The University of Pittsburgh and Carnegie-Mellon University. A highlight is Schenley Park, with 456 acres of trails, the Phipps Conservatory and Botanical Gardens.
Explore

Pittsburgh’s climate is similar to most northeast states: cold in the winter months, moderate in the spring and fall, and hot during the summer. Temperatures peak in July, with an average of 10 days over 90°F annually. During the summer months of July and August, the best time to run would be in the early morning before the heat proves too brutal.

Pittsburgh is a fairly compact city. There are great places to stay within proximity of the best running routes. The largest cluster of hotels is right downtown, providing good access to the Three Rivers Heritage Trail. There are also hotels on the north shore, which has access to the Heritage Trail and many of Pittsburgh’s cultural and sports attraction. The University of Pittsburgh/Carnegie Mellon area is also a good area to stay, with good running in Schenley Park and Frick Park, and pleasant residential neighborhoods.

Finish Line — Three locations: South Hills Village Mall, south of the city; The Mall at Robinson, between downtown and the airport; Homestead, located inside Macy’s.

Pittsburgh Frontrunners — Weekly, Tuesdays and Thursdays at 7:00pm, Saturdays at 9:00am at the Columbus Statue in Schenley Park

Fittsburgh is a great site promoting fitness and a healthy lifestyle in Pittsburgh. Lots of info on running, events, and other recreational opportunities.

Walk the Talk for Liver Health. First Sunday in October. 5k run/walk at The Great Allegheny Passage at the Waterfront in Homestead.

Spring Thaw 10, 15, or 20 miler — Held every year in late February as a warm-up for the Pittsburgh Marathon. Three long races held at the same time.

Just a Short Run — Late March. Another combination event. Given the distances to choose to register for are 5K, 8.1 miles, half marathon, or 30K road race, the name of this event is slightly ironic. Celebrating its 16th consecutive year in 2016, this event benefits The Leukemia &Lymphoma Society.