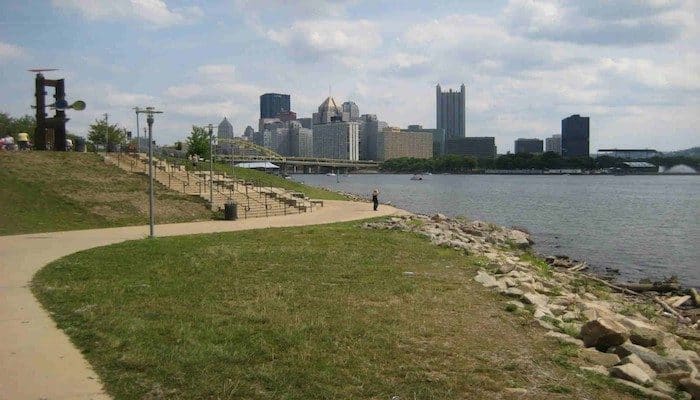 This route mostly follows the 7-mile continuous stretch of the Three Rivers Heritage Trail that covers the Strip District and the North Shore sections of Pittsburgh. The downtown section is within 1 mile of most downtown hotels (north of Grant Ave.) We chose the Veterans Bridge as a starting location, but, in reality, you can start anywhere along the Heritage Trail.

The Heritage Trail runs through the Strip District and the North Shore runs by most of the major tourist attractions within the downtown area. Heading northeast for the first mile, the Heritage Trail stops for a brief moment. Take a right to Smallman Street and follow this until 31st Street. The 31st Street Bridge will take you to Herrs Island heading south west, where you can pick up the Trail again. After crossing the Allegheny River, to the North Shore, you will pass the Andy Warhol Museum, PNC Park, the Carnegie Science center, and Heinz Field. We’ve added a loop which adds a runs by National Aviary and the Children’s Museum. Another add-on is west into Fort Pointe Park (about 1/2 mile from Heritage Trail Bridge).