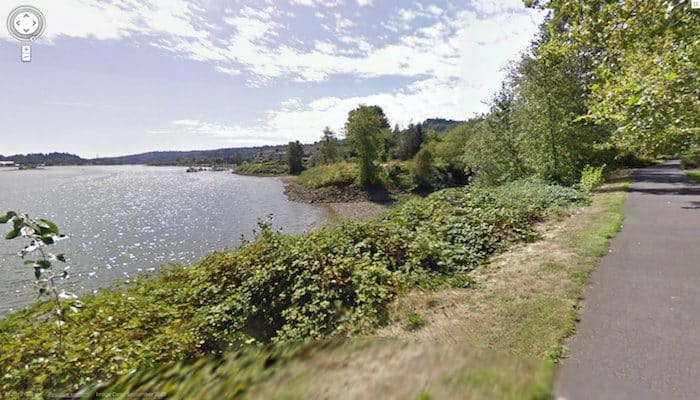 This is the signature run along the Willamette River in Portland, within blocks of downtown hotels and near the Convention Center. Like many good urban river runs, there are bridges allowing for great loop options. In fact, Portland is known as “The Bridge City”, and this route features the Eastern Esplanade, which at 1.5 miles, is the longest floating pedestrian bridge in the world!

The best running is between the N. Steel Bridge to the north and the Tilikum Crossing to the south, which is a ~ 4 mile loop. Our loop starts downtown in Waterfront Park at the SW Salmon Street Springs Fountain. The Fountain changes the patterns of its water display based on its programmings, with up to 185 water jets engaged at a time. Run north along the west side waterfront path, crossing the North Steele Bridge. Then run back along the east side, which includes a lovely 1.5 mile section along the Vera Katz Esplanade — the longest floating pedestrian bridge in the world! The Hawthorne Bridge makes for a 3 mile loop, while the Tilikum Crossing Bridge makes for a 4 mile loop. Landmarks include the Tom McCall Waterfront park, Oregon Maritime Museum, the Oregon Museum of Science and Industry, and over the Eastern Esplanade, which at 1200 feet is the longest ‘floating walkway’ in the U.S. The 1,700 foot Tilikum Crossing is a car-free bridge with great views of the river and Mt. Hood.

Longer Option: Connect with the South Waterfront trail for an additional loop of nearly 8 miles between the Tilikum Crossing Bridge and the Sellwood Bride.

An exploration of the south section of the Willamette River trails, between the Tilikum Crossing and Sellwood... more...

All Portland, OR Routes