No Thanks
Provence, France 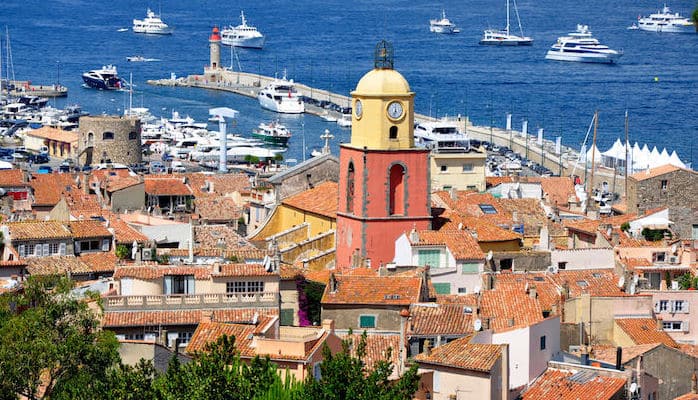 La Vigne à Vélo: Connected to the larger Mediterranean cycling path, the Vigne à Vélo is a 40 km route connecting the communities of Vidauban, Taradeau, Les Arcs-sur-Argens, La Motte, Le Muy, Trans-en Provence, Draguignan and Châteaudouble. The paved, packed stone, and gravel greenway follows the route of the former Train des Pignes railway line, passing museums, wineries, chapels, and cascades. The most complete section of the path is the 15 km from Les Arcs to Draguignan. It’s about 5 km from Les Arcs to Le Muy, 1.5 km from Le Muy to La Motte, 2.6 km from La Motte to Trans-en-Provence, 3 km from Trans-en Provence to Draguignan, and another 1.8 km to the Draguignan limits. MAP.

La Mediterranee à Velo: A 70 km route from Sillans-la-Cascade east to Claviers, La Mediterranée à Velo is France’s prized section of the EuroVelo8 path. Popular sections of the trail in Provence start from Peyrolles-en-Provence and Draguignan, where it connects with Le Vigne à Vélo. MAP. 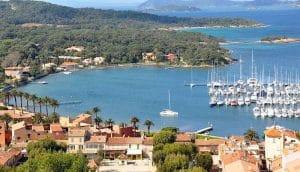 Porquerolles Island: For those with a little extra time on their hands, the national park island of Porquerolles is a lovely destination. The minimally developed, lightly trafficked dirt roads of Porquerolles make for a scenic and safe route of any length. Because the south shore of the island is lacking roads and trails, a full island circuit is not possible, but there are some nice runs to points of interest around the island. The signature route is the Piste du Langoustier to Fort du Langoustier (7.7 km, or 9 km “lollipop” – ROUTE MAP). Other good options are the Route du Phare-Ché du Cap-d’Armes to Rocher de la Croix (5 km – ROUTE MAP), the Route du Mont des Salins to Pointe des Salins (6 km – ROUTE MAP), or the Piste du Cap-des-Mèdes to Plage Notre Dame (7 km – ROUTE MAP).

Saint Tropez Coast: The pretty French Riviera city of Saint Tropez is home to the famous Gulf of Saint Tropez Marathon. It’s a course across the gulf’s picturesque coastline, but you don’t need to be a participant in the long Easter weekend race to enjoy running here. Start from the Citadelle/Pointe du Cimetiere and run west on Rue Cavaillon. Wind through the cobblestone streets and bright architecture of downtown to reach the harbor. Turn LEFT along the waterfront and continue out to the large parking lot and boat club at the Société nautique de Saint-Tropez. Turn LEFT up to Avenue Géneral de Gaulle, then turn RIGHT. Runners can continue along the sidewalk, then the bike lane, as far as Port Cogolin. The stretch along D98A isn’t particularly scenic, but it is safe, and runners can return to the water by turning RIGHT at the MDA down Boulevard des Marines to Port Cogolin harbor. As an out and back, this run can reach up to 15.7 km. ROUTE MAP.

The Roman Way: Take a pretty tour of Villecroze from the “Roman Way,” an easy to follow 7 km path overlooking the scenic Tourtour valley. Start from the General de Gaulle Plaza and cross to the right of the village school. Turn RIGHT over a small bridge, and start your ascent on The Roman Way. Pass a small chapel and go along a metal railing until the tarmac ends. Continue straight on the rocky path. Come across another wide paved track and stay straight, keeping the fence and walls to your right. The track evens out and widens to views of Tourtour ahead. At the fork, turn RIGHT towards Beauluc, Bernadin les Laurons, la Moliere. At the next fork, turn RIGHT onto Chemin des Tuiliers and descend, overlooking the valley. Just before the tarmac ends, bear RIGHT onto the descending side trail. Further down, turn LEFT onto the path towards the Alumines. Arrive at a fork in front of a brick building and bear RIGHT. Keep to the right after the bend. After crossing an embankment, take the second RIGHT and continue through the pines. Keep the main Villecroze road to your left and go straight up the path at the house on the left. This will carry you back to the start. When in doubt, follow the yellow markers. For more information, and other routes in the area, visit the Villacroze Tourism website – there’s a Word doc describing the trail.

Domaine of Valcolombe: Another favorite route from Villecroze is this pretty 4 km tour of the wooded hills above the Domaine of Valcolombe. Start from the center of town and take the D51 towards Salernes. After the sharp left turn and the sign leaving Villecroze, take the Chemin des Espèces, a small lane which will carry you towards Valcolombe. Turn RIGHT at house number 76 and go alongside it for about 100m. Then, go straight onto the flat rocky path. Pass under the barrier and go up the hillside, following the yellow markers. After admiring the splendid views of the countryside, the path reaches an intersection. Leave the yellow markers and turn RIGHT down the wooded track. At the green water tank, continue LEFT to the pylons at the end of the track. Follow another, narrower track downhill until it reaches Chemin des Espèces again. For more information, and other routes in the area, visit the Villacroze Tourism website.

Lac Canneti: A 4 km escape in Le Cannet des Maures, a quiet village in the heart of Coeur de Var, this mixed-terrain route follows the banks of the Real Martin (river) out to the Etang de Colbert. Start from the Le Luc et le Cannet train station and follow Rue du Lavoir then Chemin du Caussereine down to the river. Turn LEFT onto the river path as it winds under A15 and out to the lake. Loop clockwise around the lake, then follow the same course back to the start. ROUTE MAP. 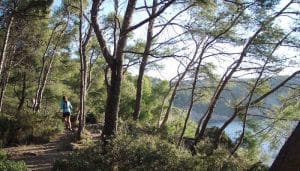 Sentier du Littoral: The “coastal trail” is a remarkably scenic 5.7 km path along the Saint Cyr shoreline between Port d’Alon and Pointe Fauconniere. Runners can also go 5.7 km in the opposite direction towards Bandol. The gravel and stone trail includes some steps, and a few slightly technical sections, but the views of the Mediterranean are stellar in either direction. Runners headed northbound should stop and return at Pointe Fauconniere. The cliffs north of here are unstable, and the trail is closed for maintenance to Pointe Grenier. MAP. TRAIL INFO.

Sentier des Vignes: One of the easier trail running options in Saint Cyr is the Vineyard trail, an inland route beginning from la Madrague harbor. The trail starts at Avenue Abbé dol and winds through dunes, olive groves, and vineyards to Port d’Alon. Despite some sections of soft dune sand and loose rocks, the trail is a fairly easy and accessible 7.4 km out and back.

Promenade Rose: Easily accessible from most hotels, this pretty waterfront promenade between the new harbor and La Madrague is one of the favorite running routes around Saint Cyr. This classic seaside run is bustling with activity, from restaurants and shops to beaches and hotels. Begin near the tourism office on D66 and make your way to the waterside. Follow the promenade east along the water until the roundabout and take Route de La Madrague out to the beach/harbor. The route is 4.7 km out and back, but when the north section of the Sentier du Littoral is repaired, runners will be able to extend the route south as far as Bandol. ROUTE MAP. 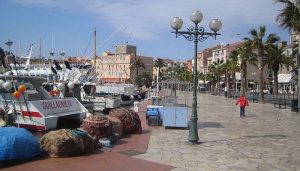 Waterfront: The bustling waterfront of Sanary-sur-Mer (13 km southeast of Saint Cyr) is more than a beach destination. Runners will love this spot too for its concrete walkway along the port, which meets a bike path and boardwalk stretching as far south as the Gaou islands. The waterfront paths add up to about 7 km one-way, but the dirt paths of Le Petit Gaou and Pointe Negre are scenic add-ons. ROUTE MAP.

Crapa De La Vernette: Thanks to its cool, shady forests, the Crapa park is a popular place for a run on a hot and sunny day. There are some hill climbs in the park, but once runners arrive at the top of the plateau, the terrain levels out to beautiful views of the coastline. A loop around the park is about 3 km.

For runs in the southeastern region of Provence, also known as the Côte d’Azur or French Riviera,... more...