No Thanks
Rio De Janeiro 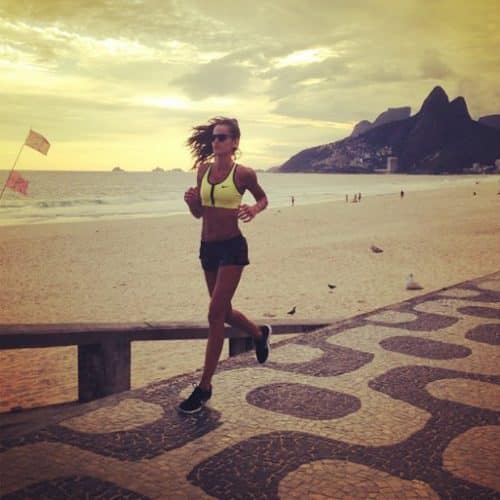 Rio is unique among world cities in the opportunities for spectacular beach running. It is possible to run some 20 miles along beach side promenades from Flamengo Beach to Barra, with a few road connections. We’ve broken our Rio beach runs into four distinct running opportunities: Flamengo, Copacabana to Leme, Ipanema to Leblon, and Barra. Most of the running is on dedicated boardwalks and multi-use paths. It’s also possible to run on the beach, depending on tides, crowds, and surface conditions. If running on the beach, take extra precaution.

The Flamengo beach and park stretching along its length is one of the great urban beach runs. Start in Zona Norte at the Museum of Modern Art. Pass the Memorial of World War II with the tomb of the lost soldier then you will reach Marina da Glória. Follow the marked path around the cove of the Bay and between the tre 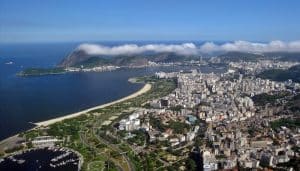 es. Once you reach the Monument to Estacio de Sa, you should turn around. In order to vary your return route, take a right (towards the sea) to the Calçadão da Praia do Flamengo.

Flamengo beach is near the Rio airport and there are many hotel options in the area.

From Leme to the Fort of Copacabana, there’s perfect running along a beachfront path. Enjoy the ocean views on one side and the observe the comings and goings of various international hotels along th 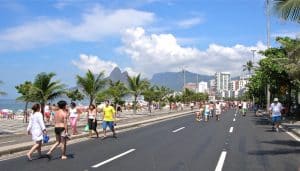 e other. The route can be joined at any point depending on where you are staying. There is a dedicated, paved path that 2.5 miles one way. On Sundays, the road that runs along Copacabana and Ipanama Beach is closed to make more room recreation.

Among the great beach runs in Rio, Ipanema is arguably the most popular. This route follows the beach made famous in the bossa nova song “The Girl from Ipanema” in the 1960s. A long, arcing expanse of soft white sand and rolling waves, Ipanema routinely reaches the top of the “Best Beaches in the World” lists year after year. While you run, enjoy a constant sea breeze and breatht 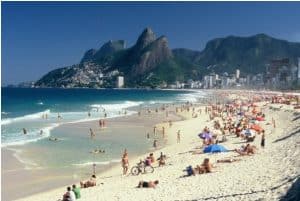 aking views of the Atlantic and Morro Dois Irmãos (Hill Brothers). This route is highly recommended during sunset and on Sundays when one of the traffic lanes closes. There is a dedicated bike lane, and a wide sidewalk for running. Or, run on the beach! After your run, have a beer in Garota the Ipanema, the bar where Tom Jobim was inspired to write the song “Girl from Ipanema.”

Yet another path along a beautiful beach is located in Barra. Barra is the newest area in the city, with modern arc 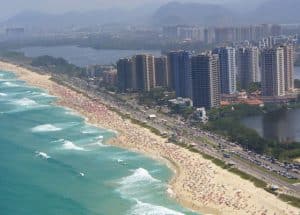 hitecture and lots of space. If you’re looking to run a long distance, this route is your best option. Almost 12 miles long, this path offers runners views of the ocean on one side and views of lagoons and the mountains on the other.

Our guide for running around and between Rio’s main Olympic venues. Highlight is the Tim Maia Ciclovia,... more...