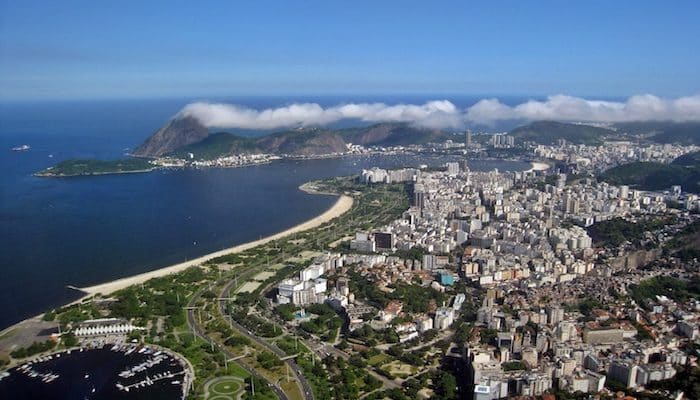 Rio de Janeiro, Brazil is one of the most visited cities in the Southern Hemisphere. The “marvelous city” (cidade maravilhosa) is home to beautiful beaches such as Copacabana, Ipanema, and Leblon, the Christ The Redeemer statue atop Corcovado Mountain, and Sugarloaf Mountain. Other travelers find themselves in Rio for major events including the 2014 World Cup, 2016 Olympics (both at the Maracanã Stadium), and the annual Carnaval celebration.

The spectacular geography and warm climate make Rio one of the world’s unique running cities. Running highlights include various beach runs, a lagoon loop run with views of the Christ The Redeemer statue, and a route through the quaint neighborhood of Urca and a run up the cobblestone hills of Santa Teresa.

We have also provided a guide to the major Olympics venues. A spectacular new 2.5 mile elevated bike path, the Tim Maia Ciclovia, has been built connecting alongside the coastal expressway between two of the main Olympic centers: the south zone in Lebron, which will stage the rowing and triathlon, and the main Olympic Park in Barra de Tijuca. Unfortunately, a huge wave tore down a section of the path in April 2016. Hopes are it will be repaired in time for the Olympics.

Note: Crime is unfortunately a major issue in Rio. We recommend seeking advice and talking to your hotel in order to learn the right precautions and areas to avoid. Leave the valuables at your hotels and take a partner with you.

In Rio de Janeiro, buses are the main form of public transportation. Nearly 440 municipal bus lines run frequently and serve over four million passengers every day. The system is relatively safe by day but less so at night. Additionally, there are two Metro lines in Rio. The two lines serve the city seven days a week. The first line runs from General Osório in Ipanema to Uruguai Station in Tijuca. The second line runs from Botafogo, sharing ten stations with the first line, terminating at Pavuna in northern Rio. The Metro runs services from 05:00 am to 12:00 midnight, Monday to Saturday, and from 07:00 am to 11:00 pm Sundays and public holidays.
Map of Public Transport

Some of our favorite runs in Rio De Janeiro

Rio has some of the most spectacular beach running of any city. We’ve broken our Rio beach... more...

Our guide for running around and between Rio’s main Olympic venues. Highlight is the Tim Maia Ciclovia,... more... 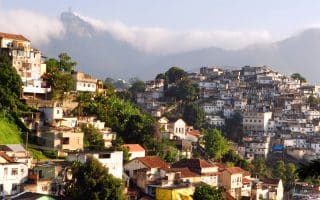 This varied and hilly art and architecture tour includes some of Rio’s most interesting sites and neighborhoods. Historic buildings, the Santa Teresa neighborhood, and the harbor.
Explore 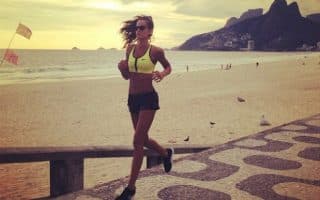 Rio has some of the most spectacular beach running of any city. We’ve broken our Rio beach runs into four distinct running opportunities: Flamengo, Copacabana to Leme, Ipanema to Leblon, and Barra.
Explore 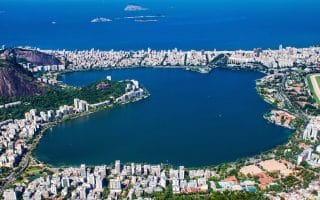 This path surrounding the Lagoa features views of the statue of Christ the Redeemer, several closer hills, and the nearby National Park of Tijuca. The path is geared to runners, with distances marked every eighth a mile.
Explore 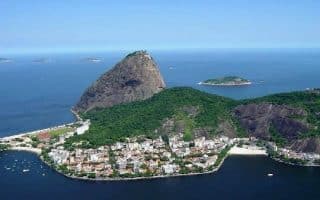 Urca is one of Rio’s quietest neighborhoods and home to Sugarloaf mountain. This route features some beautiful old buildings and views of Guanabara Bay, skirting the base of Sugarloaf Mountain.
Explore 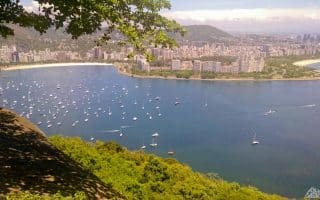 Enjoy the natural beauty of Urca with the the Cláudio Coutinho track around the base of Morro da Urca. This marked-out route offers panoramic views of the ocean and Praia Vermelha (Red Beach).
Explore

Our guide for running around and between Rio’s main Olympic venues. Highlight is the Tim Maia Ciclovia, a 2.5-mile elevated path along the rocky coast.
Explore

Rio has some of the most spectacular beach running of any city. We’ve broken our Rio beach runs into four distinct running opportunities: Flamengo, Copacabana to Leme, Ipanema to Leblon, and Barra.
Explore

Our guide for running around and between Rio’s main Olympic venues. Highlight is the Tim Maia Ciclovia, a 2.5-mile elevated path along the rocky coast.
Explore

Rio’s climate is warm to hot and humid. Temperatures don’t vary much throughout the year. Winter high temps average around 80F (26C) and summer closed to 90F. Nights stay warm and humid, with temps rarely dropping below 60F. There can be periods of heavy rain, especially from December to March. Due to Rio’s location near the equator, day length is relatively consistent throughout the year. Be careful of the heat and humidity, especially at the height of the day.

Rio is divided into Zona Norte (north zone), Zona Sul (south zone), Centro (center), and suburbs. Most of the hotels are located in Zona Sul. This area is known for the beaches and is focused on tourism. The majority of running routes are accessible from this area. However, Centro also has a plethora of hotels. The center of the city is a must, for its historical importance. Walking around Centro. you will experience a great mixture of old and new architecture, and see beautiful churches. The most important museums in the city are here. The Flamengo, and Centro — Lapa — Santa Teresa routes begin from this part of town. Rio has a very active running community and that leads to frequent running events!

Rio Marathon May. Marathon, Half Marathon and 6km Family Run.

Run the Night 10K November. A 10K (also 5K) with a playful environment including music, entertainment and many friends. It is the event for you to enjoy the Saturday night in a different way!

Race Venus October. Offers 5K, 10K and 15K. Venus is the biggest race for women in Brazil and one of the world’s large