No Thanks
Saint Kitts & Nevis 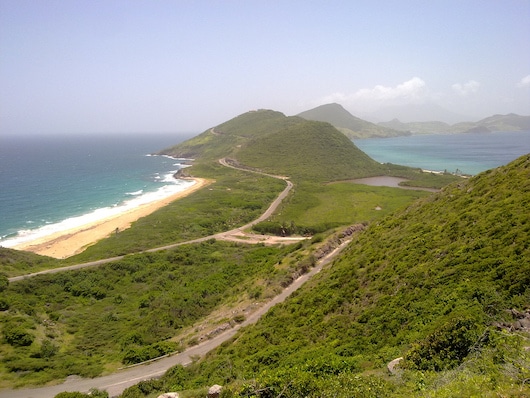 Saint Kitts is the northern of the Saint Kitts & Nevis Federation. Bordering the Caribbean on the west site and the Atlantic on the east side, Saint Kitts is 29 km long and 8 km wide. The situation for running on Saint Kitts isn’t great. Except for some short sections, there’s no sidewalk or shoulder on the fairly narrow main road that encircles the island. Most of the interior rugged and hilly.  Still, we’ve researched the the best places to run on Saint Kitts that aren’t trail runs or hikes:

Half Moon Bay. On the southeastern end of Saint Kitts. Some decent roads for running around Conaree Village; a pretty road along the west side of the Royal St. Kitts Golf Course; and some short sections of runnable beach. Another recommendation is some of the smaller, less trafficked roads just inland in Lucas, especially around The Royal Basseterre Valley National Nature Reserve.

Quiet Roads Just Off the Main Rd. One can stitch together some safer running on some of the quieter interior roads near the small towns:

Trail Running. There are some rugged and hilly trails that are suitable for more challenging trail running. The area around Mt. Liamuiga, a volcano that’s 5 km and 1155m high, has numerous trails. A gentler, but still rugged option is Central Forest Reserve National Park.