No Thanks
Santa Cruz, CA 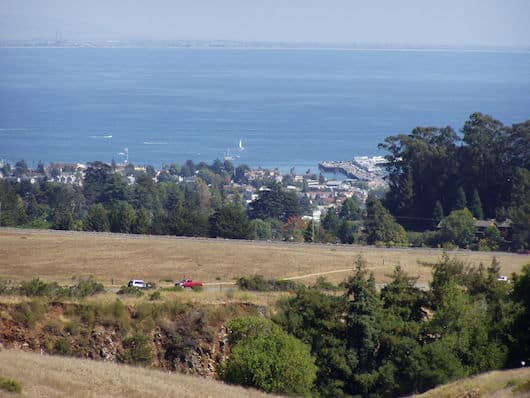 The University of California at Santa Cruz is one of the most spectacular college campuses in the United States for running. The campus sits on 2,001 acres of rolling, forested hills overlooking the Pacific Ocean and Monterey Bay. There are literally miles  of trails, through open meadows, redwood forests, and landscaped gardens. A series of footbridges crosses over ravines and provides great connections to different parts of campus. The southern part of the campus consists of the Great Meadow, and features a paved, 2 mile loop trail called the Great Meadow Bike Path, plus other dirt trails. Directly to the north are trails through an Arboretum. Many of the campus buildings are located within forested terrain, and the northern half of the campus property has remained in its undeveloped, forested state apart from fire roads and hiking and bicycle trails. We’ve mapped the Great Meadow Bike Path, but we also suggest creating your own route, depending on the type of terrain you’d prefer. It’s easily possible to put together a 6-7 mile run on non-overlapping trails. Bonus: many of the the trails are well lit at night!

Several miles of wonderful dirt trails in this park sitting above the water. The classic route is... more...