No Thanks
Sarasota, FL 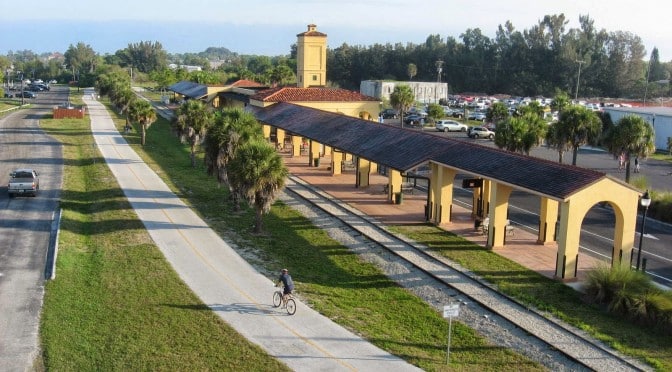 Friends of the Legacy Trail

The Legacy Trail is a former rail line, turned into a paved recreation trail that runs for 10.8 miles from the Venice Train Depot near downtown Venice, north to Culverhouse Nature Park, which is 8 miles south of Sarasota. It’s a popular bicycle trail, used extensively by joggers and pedestrians as well. There is a mix of terrain and beauty on this trail. There are shaded, foliated sections, some pastureland, streams and rivers, and some more populated sections near busy roads. The trail is easy to follow and well signed, with mile markers along the way.

The trail passes through Oscar Sherer State Park at about the half-way point of the trail. The park itself has about 15 miles of trails. At the southern terminus of the trail is the northern trailhead of the Venetian Waterway Park Trail, a lovely, paved trail alongside the canal that runs south to Casperson Beach and the Shamrock Park & Nature Center.

A planned extension would take the trail 8 miles further north to downtown Sarasota — which would be nice!

Named one of the best beaches in the United States, it's also great for running, with white,... more...

Possibly the most dramatic run in the Sarasota area, with great water views and even a bit... more...