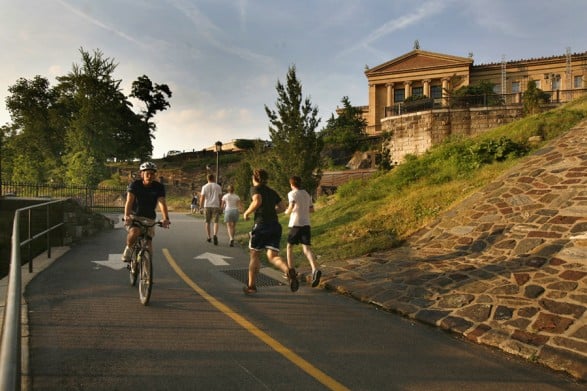 The Schuykill River trail is a multi-use trail that is planned to run some 130 miles when completed. Today, 60 miles are accessible, and there are continued developments and improvements. The section accessible from central Philadelphia is about 10.5 miles, starting at South St. and continuing north past Manayunk. Most of the route is on the eastern side, though there are a few sections where the path is on both sides. The downtown section runs from just south of South St., north to the Philadelphia Art Museum (~2 miles), and then into Fairmount Park. A highlight is the 2,000 foot long boardwalk,running parallel to the eastern shore of the river from Locust Street to the new stair tower on the south side of the South St. Bridge. This project provides an important link to the Schuylkill River Trail and Center City from University City and West Philadelphia.

For a less populated, off-the-beaten-track option, use the Manayunk Towpath which parallels the canal and the Schuylkill River. It can be accessed from the Schuylkill River Trail to the west, or Fairmount Park to the east, and features a combination of boardwalk, gravel, and dirt running.