No Thanks
Seychelles, Africa 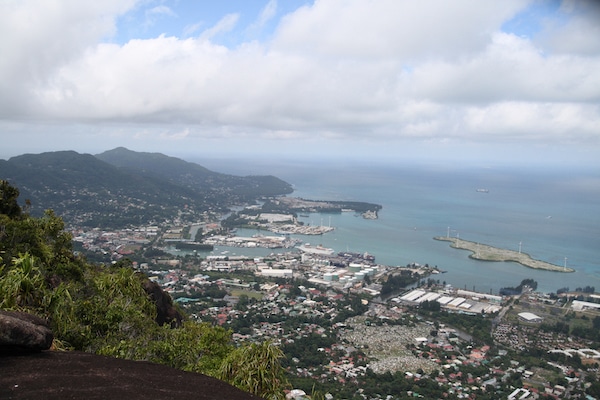 The island of Mahé contains 90% of the Seychelles population and its only international airport. The island is 16 miles long and 4 miles wide, with 20% of it taken up by Morne Seychellois National Park. Much of Mahé’s interior is mountainous and rugged. There aren’t a lot of great running options on Mahé, as most of the roads are narrow and lack sidewalks/shoulder. The extensive hiking trails make for some challenging trail running. The best places to run on Mahé include:

Main Coast Road. The main highwat that goes around the island is the Coast Road. On the east coast it’s called the Providence Hwy. It’s possible to run on this road but in most places there is not a sidewalk/shoulder, and there can be traffic. Best bet is to go early.

E Coast Rd. From the center of Victoria, the quieter Mont Fleuri/E Coast Rd. runs parallel to the highway for 9 km south to the airport. This is the best longer road running option on Mahé. Note: No shoulder, and  quite hilly after ~4 km.

Victoria Area. Victoria is the capital of the Seychelles and has some decent running. The main road in this area has a sidewalk. We’ve mapped a route starting from the center of Victoria, passing by the National Stadium (running track!), through the paths of the Jardins des Enfants, over to the Botanical Gardens. Continue south along the main road to Roche Caiman Sports Complex, where you can do a 1-2 km loop around the paths (and another running track), then out to Eden Island. Overall this could be a 10-15k route.

Beau Vallon Area. Put together a nice run here, including the 1.5 mile runnable beach, and a ~1 km walking path along Coral Strand in the area of the Savoy Seychelles Resort. The Coast Road headed north is OK for running if you go early. Another option is to run on Bel Ombre Rd., which runs for 5 km from Beau Vallon to the Anse Major trailhead in Morne Seychelles National Park

Morne Seychelles National Park. This park comprises 20% of Mahé’s landmass. There are numerous hiking trails, making for some moderate to challenging trail running options. The footing on the popular trails, such as Anse Major, is very tricky.

Best Beaches for Running: Mahé has some lovely beaches, but most of them are small from a running perspective. Beau Vallon Beach, on the west coast is a popular beach and the best for running on Mahé, with firm sand near the water. 1.5 km long, not very wide. Anse Intendance Beach on the southwest coast is one of the prettiest beaches on Mahé. 1 km long.

The best options for running on Praslin are some sections of the coast road (go early!), the... more...