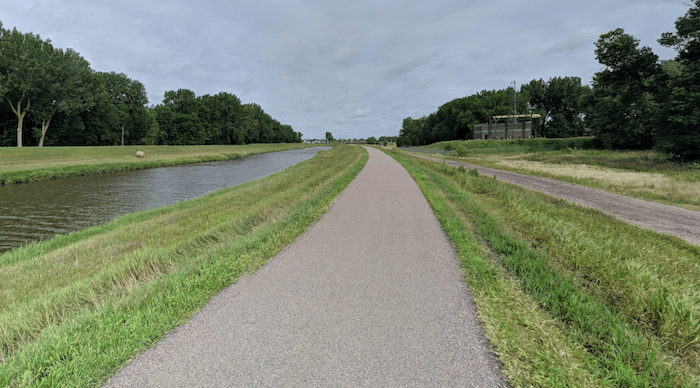 The Sioux Falls Bike Trail is the anchor and signature running spot in Sioux Falls. The paved multi-use trail runs along the Big Sioux River, connecting the heart of Sioux Falls’ extensive linear park system. One thing that’s fun about this trail is that rather than being a typical one-way bike path, the trail forms an actual 19-mile loop. So do the loop or choose a section!

There are many access points, but a good starting point is Falls Park, which features Sioux Falls’ iconic waterfalls. Head south along the east side of the river, passing through numerous parks. The trail is a combination of open parkland and some wooded sections, and is fairly flat. There are good views of the river a good part of the way. The table below shows segment distances, starting from Falls Park.

Spur Option: While the main trail stays along the east side of the Big Sioux River, a spur of the trail runs along the west side, starting at Sertoma Park — cross at the 7.1 mile mark. There, there are sections of trail around the Outdoor Campus. The main spur trail heads north for 2 miles, then branches left along Skunk Creek for up to 5 miles through Dunham Park, Legacy Park, and ending at Family Park.

Add-Ons: There are good options to add on with trails in the numerous parks along the Bike Trail — notably Falls Park, Sertoma Park/Outdoor Campus, Dunham Park, & Family Park. 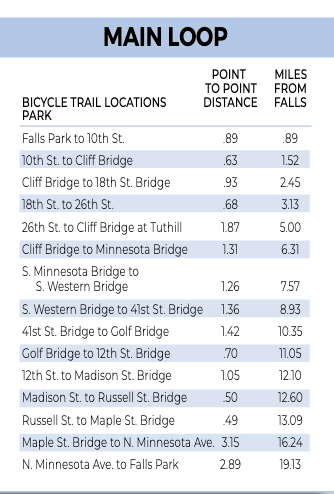