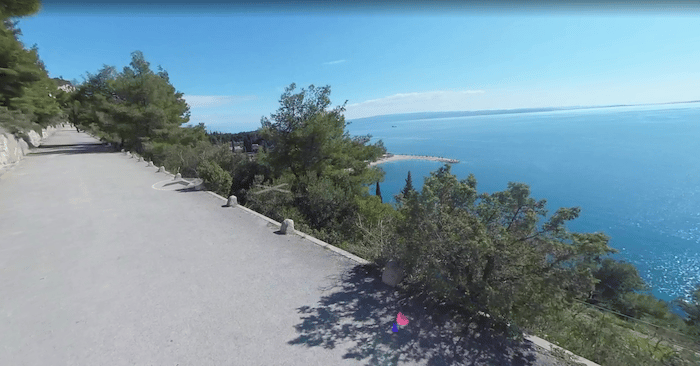 Marjan Forest Park is one of the signature running spots in Split. There are pedestrian-only roads and paths through a Mediterranean pine forest, with views to the water and surrounding mountains. For the intrepid, one can run up nearly 800 stairs between the waterfront and Telegrin Terrrace, which features fabulous views. Marjan is also a great shade option on a hot day! Note: Šetalište= promenade.  Note: there are water fountains along the paths.

There are a few different ways to run in Marjan. We’ve mapped the popular 8.5 km route that uses mainly a pedestrian-only road/path, which is mostly paved. Our start point is the north gate. Run counter-clockwise, following the Šetalište MarinaTartaglie headed west. After looping around the west end, our route follows the Marangunićevo šetalište, climbing ~100m up to the Vidikovac viewpoint. Just past there, the path splits — bear left onto Marjanski put, with the option of branching off for 0.5 km to the Telegrin Terrace viewpoint at 178m. Complete the loop, following the Marjanski put.

Options: Instead of taking Marjanski put to Telegrin, you can continue on Marangunićevo šetalište. You can also take the Ivana Meštrovića path instead of Marangunićevo path, to enjoy views of the water at the southern end of the park. Also, instead of starting at the North Gate, start at the Marjan Hill Stairs, next to the park information center. Climb the 300 stairs to the Marjan viewpoint, and then join the path from there. For some more rugged trail running, see the Vatrogasni Put trail on the map.

Run the Stairs: Run up to 800 stairs! Starting next to the park information center, climb the Marjan stairs to the Marjan viewpoint (300 stairs). For more, follow the Marjanski put, and then pick up the stairs again to the Telegrin viewpoint.