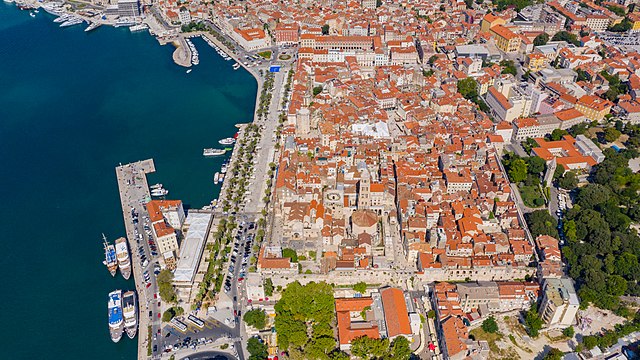 Split, the second largest city in Croatia, is situated on a Dalmatian Coast peninsula on the eastern shore of the Adriatic Sea. It’s a popular visitor destination for its beaches, Old Town highlighted by the Diocletian Palace and numerous Game of Thrones filming sites. Running in Split is centered on the attractive waterfront and the  Marjan Hill park at the western end of the peninsula.

We’ve put together a waterfront route of up to 7 km between the marina in Split and Žnjan. One of the best places to run in Split is along the scenic pedestrian paths in the Marjan Forest Park, including up to 800 stairs leading to the Telegrin Terrace and great views. We’ve also put together a couple of ‘runseeing’ tours of Split, showcasing the highlights of Old Town and some parks in the newer part of the city. Trail runners should head to the Kozjak and Mosor mountains, which are only 20-30 minutes away from Split and feature some scenic hiking trails.

A few notes about running in Split: the city is quite hilly! The only option for flat running is along the waterfront. Also, the beaches, while lovely, tend to be gravel or pebbly, and are not great for running. And be aware that summers can be quite hot — the shade of Marjan is a good option on a hot day.

Our Guide Other Dalmatian Coast Locations

This is a guide to running on the Dalmatian Coast, the narrow belt on the east shore... more...

Dubrovnik is a Croatian city on the Adriatic Sea. A popular seaport directly across from Italy, this... more... 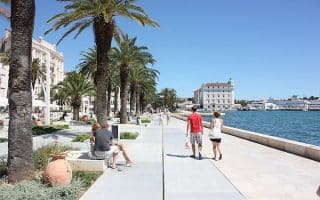 Along the Water | By the Beach | Seaside Promenades
Pleasant running along water in Split, featuring nice views of the marina/harbor, the Adriatic, and numerous beaches. Up to 7 km from Sustipan Memorial Park south to Titanic Park in Žnjan. Combination waterfront path/sidewalk.
Explore 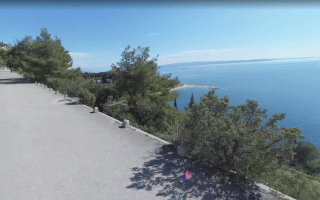 Great Views | Hilly | 'Unique' Runs
Run on pedestrian-only paths through a Mediterranean pine forest, with great views to the water and surrounding mountains. We've mapped an 8.5 km loop, but there are additional paths, trails, and the option to run up to 800 stairs!
Explore 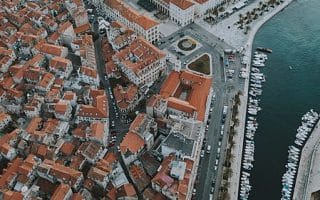 Hilly | Historic / Tourist | Runseeing
Two 'runseeing' tours of Split that hit the highlights of the historic center and some of the parks in the newer part of town. Includes Riva, Diocletian Palace, Game of Thrones sites, parks, waterfront/beach, & a running track!
Explore

Split has a Mediterranean climate, with hot, dry summers and mild, wetter winters. Runners should note that daytime temperatures in summer average 30C — use caution!  Spring and fall are delightfully warm. In winter, high temperatures are in the 10C (50F) range, with nights around 5C (low 40s). It can rain at any time of year, though winters are notably wetter. There can be snow in the mountains nearby.

Split has become a major visitor destination, and has a large number of hotels for a city of only 160,000. Most of the accommodations are located between Marjan Park and Bacvice Beach, providing access to all three of our principal running routes in Split.

There are Adidas and Nike outlets. See the overview map.

Iglu Sport is another good option for running gear.

Road race calendar for Croatia. Run Croatia also has a good calendar and other resources for running in Croatia.

Marjan Trail  Part of a series of trail races in the area.