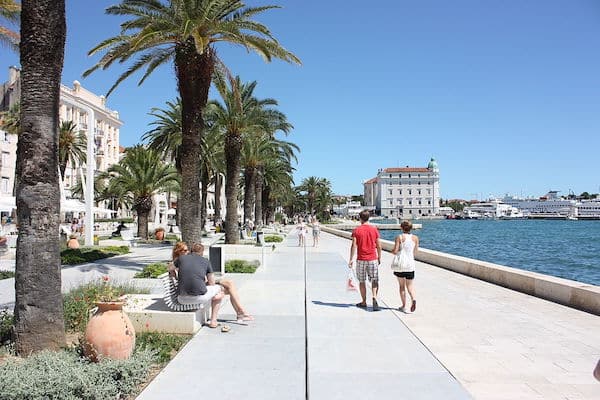 There is pleasant running along water in Split, featuring nice views of the marina/harbor, the Adriatic, and numerous beaches. Overall, it’s possible to run for nearly 7 km from Sustipan Memorial Park at the ACI Marina, south to Titanic Park in Žnjan. Note: Šetalište=Promenade.

Starting from Sustipan, head along the marina and the ‘West Bank’ promenade, passing the Riva boardwalk. Stay along the water, passing the train station, and then continue toward Žnjan, getting onto a dedicated waterfront path betweeng Bacvice Beach & Firule Beach. Continue along, following the Šetalište Kalafata/Šetalište Pape Ivana Pavla II, to the end near Titanic Park.

Add-Ons: Can combine with our Marjan Hill/Park & Split ‘Runseeing’ Tours, which are near the promenade in the center of Split.

Note: the beaches in Split are mainly pebble or gravel….not great for running.