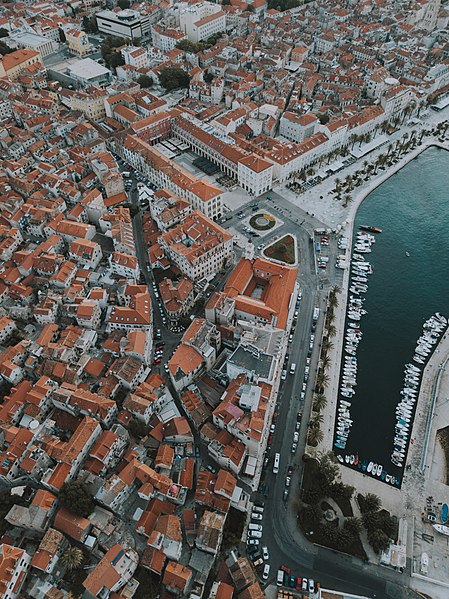 We’ve put together a couple of routes that make for a nice ‘runseeing’ tour of Split, hitting the highlights: Riva, Diocletian Palace, Game of Thrones filming location, Grgur Ninski statue, a running track in the Croatian football club stadium, Bacvice Beach, and the outskirts of Marjan Forest Park. Note that the streets of Split old town are narrow and labyrinthine, so use our mapped route as a guideline to create your own route.

10k ‘Heart of Split’ Tour. This 10k route, designed by EcoBnB, is literally shaped like a heart. Here’s a link to their route description and a picture of the map, which we’ve turned into a mapped route. This route sort of skirts the heart of Old Town, but includes some nice, wide, tree-lined streets just outside the center.

6K Highlights of Old & New Split. Start in Strossmayerova Park, with the famous Strossmayerova Fountain at the center and the Gregory of Nin sculpture. Exit the park and use Dioklecijanova Street as the anchor, heading south toward the water. This street passes by numerous historic sites just to your left, including the Dioklecijanova Palace, Game of Thrones Rebellion of Slaves location, & more. Take a dip into these maze-like streets. Pass the Saint Domnius Cathedral, and then RIGHT to Riva, the famed waterfront boardwalk. Then head back north, through the Republic Square, using Marmontova street as the anchor, passing the Game of Thrones Museum, crossing Sinjska onto Slavićeva Ul. (street). through Park Emanuela Vidovića, onto Ul. Zrinsko Frankopanska, to the Football Stadium, and then Park Mladosti (running track at east end). Use Ul. Hrvatske Mornarice/Ul. Domovinskog rata for the return.

Add-Ons/Options: Combine the two above routes to create your own run. Can also extend on the waterfront with our route there, or the paths in Marjan Forest Park.