No Thanks
St. Catharines/Niagara-on-the-Lake, Ontario 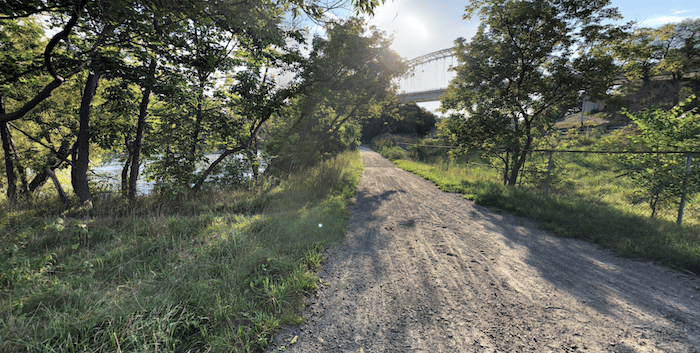 Just south of downtown St. Catharines, there are some pleasant gravel trails running alongside Twelve Creek, extending several km from downtown. Starting just across Highway 406, the Twelve Trail runs for 5 km along the east side of the creek south to the campus of Brock University. It’s a combination of open and wooded, with occasional views of the creek.

On the west side of Twelve Creek, the Participark Trail runs along the creek for 4.8 km south to Trail Race Rd., near Rotary Park. It’s similar to the Twelve Trail, but with some especially nice sections right along the water.

Loop Option: The best option for a loop is to take the pedestrian bridge over the creek just north of Glendale Rd., which is at about the halfway mark of either trail.

Add-Ons: The Merritt Trail intersects with the Twelve Trail around Highway 406 near downtown.

Pleasant, green running in the northern part of Niagara Falls. It's 7.5 km one-way from the Whirlpool... more...

The classic Niagara Falls run, located on the Canada side. A wonderful path starts near Rainbow Bridge,... more...

All St. Catharines/Niagara-on-the-Lake, ON Routes
wpDiscuz