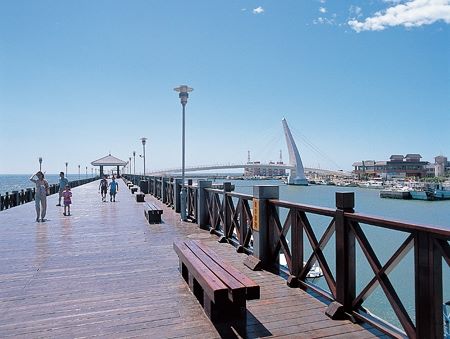 There are many opportunities for waterside running in Taipei. A favorite is along the Tamsui River, where there are paths on both the right and left banks. For running on the northern end of the Tamsui River, see this route.

Right Bank (east side): The path runs for 9 km from Yanping Riverside Park near Dadocheng Wharf to Shezi Island. There are good water views much of the way, and it’s great for sunrises/sunsets. It’s a fun way to explore the various attractions of the Dadocheng area There’s a good rest stop just before Shezi Island, which features water and bathrooms. The surface is a mix of paved and dirt.

If you don’t want to do the whole 18 km out and back, it’s easy to turn around at any point. Some key distances, from Yanping Riverside Park to Shezi, on the right bank:

Left bank (west side): The best path section is from the Taipei Bridge, through Tamsui Riverside Park, for 4 km. The Chongyang Bridge is the best to cross on foot if you want to do a loop run.

Scenic waterfront running along the Tamsui River in the northern part of Taipei. There are options on... more...