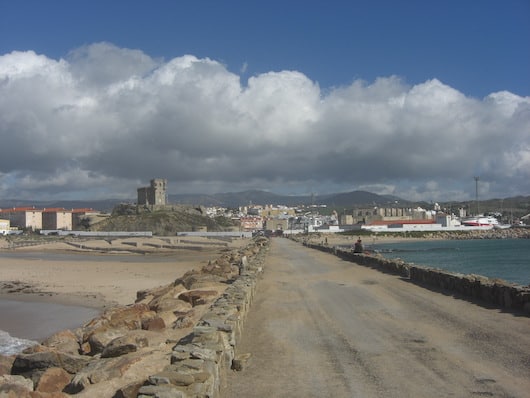 Tarifa is at the southernmost point of the Iberian peninsula, and is also considered the southern point of the Costa de la Luz that stretches north to Huelva. It’s directly across from Morocco, where a ferry will take you across the Strait of Gibraltar to Tangiers. There’s a pleasant waterfront run of 7.5 km that is divided into three sections.

Start in central Tarifa at the port, just before the bridge that goes to Isla de las Palomas. The first section heads north along the waterfront promenade, between the main road and the beach, for 2 km to the Gaia Beach Club, just past the football stadium (where you can do some track laps if you like). Great views of the Strait of Gibraltar, with Morocco in the distance!  Retrace your steps, and then take a little jaunt across the bridge to the Isla de las Palomas, and the paths that lead to the viewpoint at the southernmost point in continental Europe. After this ~2 km out and back, the final section is a ~1 km out and back past the Castillo de Guzmán el Bueno to the Torre de Miramar.

This large natural park adjacent to the town of Tarifa is a fantastic spot for running. The... more...

Loop around the peninsula surrounding the ancient port city of Cádiz is one of the most spectacular... more...