No Thanks
Las Vegas, NV 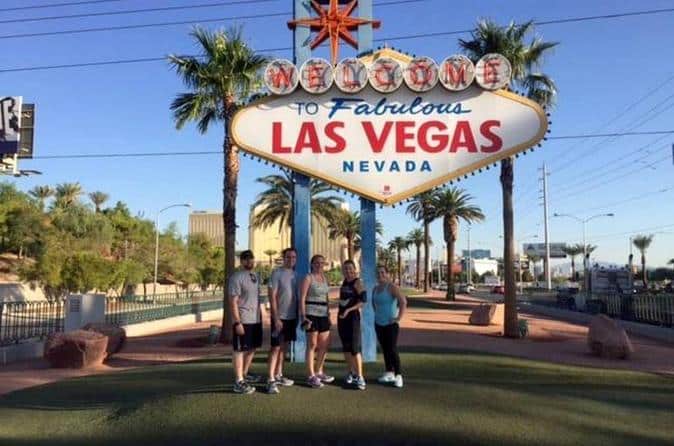 Well, this can be said about running on the Strip: it’s a one-of-a-kind run. This run goes the length of The Strip (also known as Las Vegas Blvd.), which will take you by many of the the spectacular hotels and sights of The Strip, such as The Bellagio, MGM Grand, Mandalay Bay, and so on. One frustration about running The Strip is that at several points (not reflected on the map), there is not an actual pedestrian crossing — you have to go up a stairway or through a building to get back to the street. A couple of other pieces of advice about running the Strip: go early, to beat the crowds and the heat; the west side sidewalk is wider; and the distance between the buildings is deceiving — much longer than it seems. The best section of the Strip for running, in my view, is from the main hotels around Caesars, the Venetian, etc. and heading north, toward downtown. The crowds thin out and there are fewer crossings and interruptions. The neighborhood gets a bit sketchy just north of the Stratosphere. One option is to run one-way, 3.3 miles from the MGM Grand, to SLS, and pick up the monorail for the return.

Side Roads Off the Strip

The Strip can be maddening for running, due to crowds and the lack of seamless pedestrian crossings. There are no pretty side roads or parks off or near the strip, but the best bets for running just off the strip are: E. Harmon Ave., heading east toward UNLV; E. Desert Inn Rd; Koval Ln; and Dean Martin Rd. toward, on the west side of Rt. 15, though you have to get across Rt. 15. Again, none of these are charming but you can at least get the steps in.

A great way to experience running in the Mojave Desert, only 17 miles from the Strip. 30... more...

A spectacular 3.5 mile gravel trail between the Lake Meade Visitor Center and Hoover Dam. About a... more...