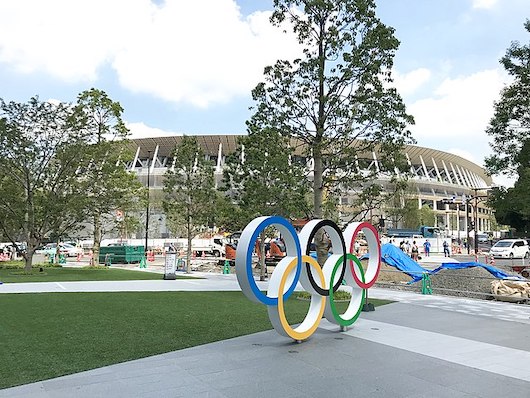 In honor of the 2020 Tokyo Olympics (being held summer 2021) and as an inspiration to runners everywhere, we’ve created a couple of exciting routes that are both a tour of some key Olympic venues and a nice run. Many of the sites are in the Chuo City & Koto City areas, in southern Tokyo. See also this super-cool map which overlays GR routes and Olympic venues!

Olympic Stadium Route. Our route combining Yoyogi Park, Meiji Garden, and Akasaka Palace passes by the Olympic Stadium. Adjacent to the stadium is a Sports Complex with a running track. Another popular route with runners is the 1.5 km loop around Meiji Jingu Gaien. Access: Kokuritsu-Kyogijo Station

Koto City Route. Up to 13.3 km.  Just east of our Olympic Village route, starting at Tatsumi Station. Nearly all off road on bike/waterfront paths. Starts at Tatsuminomori Seaside Park, passing the Aquatics Center and then Yumenoshima Park, location of the Archery Field. For a run of ~13k, extend for 1.5 km on a path along the Arakawa River, through Shinkibaryokudo Park. This is the location of canoe/kayak events.

Odaiba is an artificial island in Tokyo Bay. If you have the time, this is one of... more...