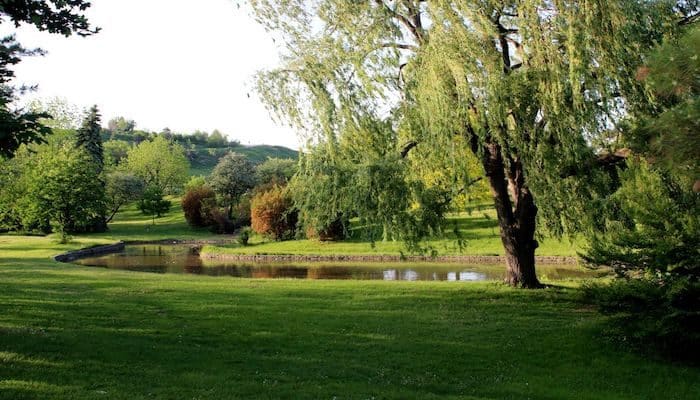 The Toronto suburb of Etobicoke stretches from the waterfront north to Pearson International Airport. The area is home to many corporate offices, hotels, and residential neighborhoods, and a number of excellent running spots. The best places to run in Etobicoke are along the several ‘linear park’ trails, plus some good waterfront spots.

Etobicoke Creek Trail. This 11 km trail straddling the Etobicoke/Mississauga border runs between Pearson Airport and Fleetwood Park. The ~6 km section near the airport to the Highway 401 is a bit industrial. The more attractive section of the trail is south of the 401, through Centennial Park and other parks for another 4 km, ending at Fleetwood Park.  STAY: Hotels off Dixie Blvd., north of Highway 401.  TRAIL MAP.  ROUTE MAP

Centennial Park. Originally a dairy farm, it was opened as a park in 1967 to commemorate Canada’s 100th anniversary. Recently one of the main venues for the 2015 Pan Am Games. The park also has a number of playgrounds, sport fields, baseball and softball diamonds, picnic areas, and a small ski hill built on top of a former dump! There are many km of trails in the park, and even some spots to do some hills! Connect to the Etobicoke Creek Trail at southern end of the park at Centennial Park Blvd.  STAY: Hotels off Eglinton Ave. West near Centennial Park Blvd.

West Humber Trail and Parkland. Pick a section of this 14 km linear park trail that runs along the Humber River for nearly 14 km between Highway 427 and Highway 401. The northern section starts near Pearson Airport at Humberwood Park. It’s 2 km to the Arboretum, and then another 6 km to the West Humber Parkland, where you can enjoy several km in Summerlea Park as well.  ROUTE MAP

Humber Bay Parks. Two adjoining waterfront parks with wonderful paths, ponds, and birding areas. Etobicoke Point has great views of Lake Ontario and the Toronto skyline. A run of all the trails can be ~10 km.  ROUTE MAP