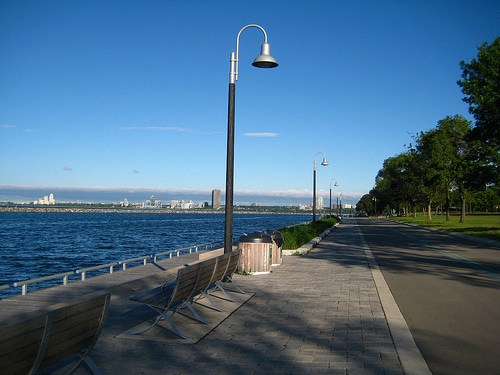 The Martin Goodman Trail is a 30+ mile trail along the waterfront in Toronto. The trail is part sidewalk and part running/bike path, generally following the water. There are some spots with great views of the water. Best place to start is Queen’s Quay (pronounced ‘key’), which is within a mile of the financial district. It is about 5 miles one-way from Queen’s Quay to the Humber River Bridge. At the 3.5 mile mark, the path reaches Sunnyside Park. Some of the nicest sections of the trail begin here, leading to the Humber River, where a large white pedestrian bridge marks the end of the official trail. The bridge leads to 350 acre Humber Bay Park, with great views of the city and additional trails for running.

If you continue running beside the water and over the Humber Bridge, you’ll find yourself at Humber Bay Park. The view of downtown Toronto from this spot is awesome and ongoing restoration projects at the park have provided wildflowers, lots of pretty greenery, and a butterfly sanctuary. Combined, the east and west side of the park total 347 acres, so there’s plenty of room to throw your weight around.

It is also possible to run east from the Quay toward The Beaches, though it is more industrial through the Docklands area

Did this on a cold day in December

Hoping to do this next time in TO!

The iconic run in Scarborough is the waterfront path at Scarborough Bluffs, with great views of the... more...